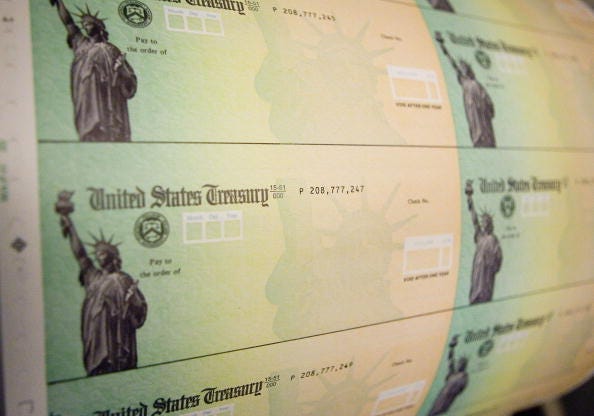 NEW YORK (1010 WINS) -- Several Americans shared on social media that a stimulus check had been sent to a deceased relative.

Republican Congressman Thomas Massie tweeted a screenshot of a text he received from a friend whose deceased father received a $1,200 check.

“Ok this is insane, but just the tip of the iceberg,” Massie tweeted. “This is a direct text to me from a friend. I called to confirm this actually just happened.”

Ok this is insane, but just the tip of the iceberg. This is a direct text to me from a friend. I called to confirm this actually just happened. pic.twitter.com/GBRPcmYMXW

"Deceased people are receiving stimulus checks today. My grandmother passed away in 2018 — and $1,200 was deposited in her bank account today," Gustin tweeted.

My grandmother passed away in 2018 — and $1,200 was deposited in her bank account today. pic.twitter.com/XkhyiGxBgj

"I know someone who received their $1,200 #StimulusCheck today & also received $1,200 for their deceased spouse who passed in early 2018, which was clearly indicated deceased on their 2018 tax return," Salaske tweeted.

Adding, "Is the government that desperate for people to spend money?"

According to USA Today, a reason for this may be because the payments are based on taxpayers' 2019 returns, or 2018 if they have not yet filed.

If a person's spouse died in 2018 or 2019, they would be eligible for a payment. And according to the CARES Act if a person who gets more than they have been entitled to, they cannot have their credit reduced "below zero" when they file their 2020 return, meaning that they would not have to pay the $1,200 back once they file taxes in 2020.