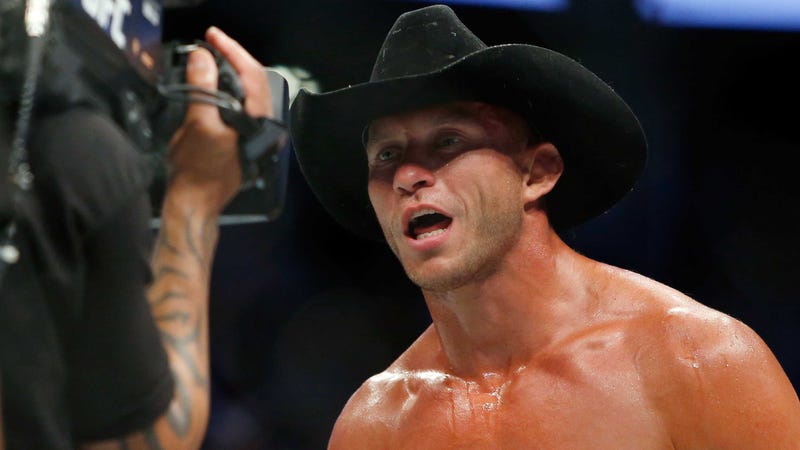 Before Donald “Cowboy” Cerrone takes on Al Iaquinta in the lightweight main event of UFC Fight Night 151 on Saturday in Ottawa, let's take a moment to reflect on what the mixed martial arts legend -- and full-time wild man -- has meant for the sport.

The 36-year-old Cerrone (35-11) has a classic fighter look, and has spent his career jumping between multiple weight divisions with a "fight anybody-anywhere-at-any-time" ethic. Here are six things to know about the fighter best known as "Cowboy":

1. Cerrone holds the UFC records for most wins (22) and most fight bonuses.

2. Budweiser chose Cerrone to represent their brand because fits their clasic Americana image. And because unlike most fighters who obsess over their diets during their 6-to-12 week training camps, “Cowboy” has said he will throw back a few beers even in the midst of his camps.

3. Cerrone fought for the UFC lightweight title in December 2015 against Rafael dos Anjos. He put in an extremely flat performance on fight night and received heavy criticism that he can’t get it done in meaningful fights. Rather than take his ball and go home, Cerrone moved up to welterweight (170 lbs.) and racked up four straight inpressive finishes in 2016.

4. The best and worst thing about Cerrone during his storied career has been his willingness to leap into fights on extremely short notice. In January 2017, “Cowboy” went for a rarity in MMA, fighting for the fifth time inside of 12 months. It had been just 49 days since his last bout, but he wanted to fight on the "UFC on FOX" card in his hometown of Denver. Cerrone got badly knocked out by underrated striker Jorge Masvidal, and went on to an 0-3 record in 2017.

5. Cerrone had a much better year in 2018, going 2-1 against a series of young welterweights. But he wasn’t content to be a stepping stone for young stars. In January, against UFC's protests, he underwent a drastic weight cut back to lightweight (155 lbs.) to fight the fast-rising, brash Alex Hernandez on the inaugural ESPN card. And Cerrone shut out Hernandez’s lights with a signature head kick that led to second-round TKO, sending the Barclays Center crowd into chants of "Cowboy, Cowboy, Cowboy!"

For a fight like that Donald, I’ll fight you.
Congratulations.

But the dream matchup between McGregor, the whiskey entrepreneur, and Cerrone, the walking billboard for American beer, never came to fruition. Cerrone quickly moved on to fight the very touch and well-rounded Iaquinta, the No. 4-ranked lightweight. With a dominant win, Cerrone would be one step closer to a title fight and one step closer to silencing the critics who say he can't win the “big one.” Regardless, it's a chance to appreciate “Cowboy” before he calls it a career.