The Jets made a four-year, $40 million offer to Robby Anderson before the wide receiver agreed to sign with the Carolina Panthers on Tuesday, WFAN's Boomer Esiason revealed on the "Boomer and Gio" show.

Sources Esiason spoke with told him about the offer Gang Green had on the table. Anderson instead will sign a two-year, $20 million contract with Carolina, where he'll be reunited with his college head coach, Matt Rhule.

Esiason said he thought the Jets' offer "would've been more than fair for both sides."

"Robby wanted to take less years and wanted to bet on himself and obviously wanted to go play for a coach that he knows, 'cause the coach obviously down in Carolina was his coach at Temple, and he feels comfortable with that offense that they're building around Joe Brady, their offensive coordinator down there," Esiason said at the start of Wednesday's show. "So Robby decided to leave and essentially bet on himself 'cause he wants to be back at the free agent table in two years, and I don't blame him.

"I don't know if the Jets would've offered him the two-year deal. That I don't know. But I do know that, according to my sources, that there was a four-year, $40 million deal on the table for Robby Anderson."

Shortly after losing Anderson in free agency, the Jets found his replacement, agreeing to terms with former Buccaneers speedster Breshad Perriman on a one-year contract that will pay him anywhere from $6 million to $8 million. 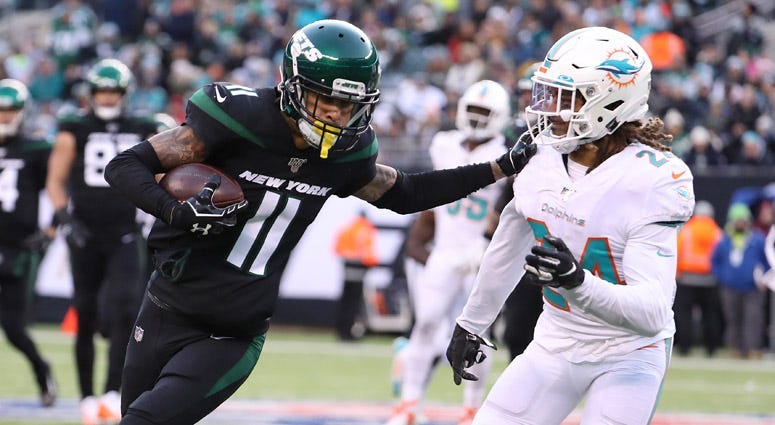 "Robby Anderson, he's had good things in his past as a Jet, bad things in his past as a Jet," Giannotti said. "But it seemed like him and Sam were on the same page. And that's the part of this that I don't like, that here's Sam Darnold going into his third year -- and you're talking about two bumpy years to start out -- and it feels like he's starting over again. And I just don't think that's the greatest thing for a young quarterback like him."

Added Esiason: "Probably the loser, I guess -- if you wanted to say that he was a loser in all of this -- would probably be Sam Darnold because of the relationship that he had with Robby Anderson. And then the other question is now, when are OTAs going to start? Are they going to start? Are these guys going to get a chance to work out together? Are they going to get to know each other?"

Boomer said he expects the Jets to add one or two more receivers in the draft.

To listen to the open from Wednesday's "Boomer and Gio" show, in which the guys also discuss Mets pitcher Noah Syndergaard needing Tommy John surgery, click on the audio player below.