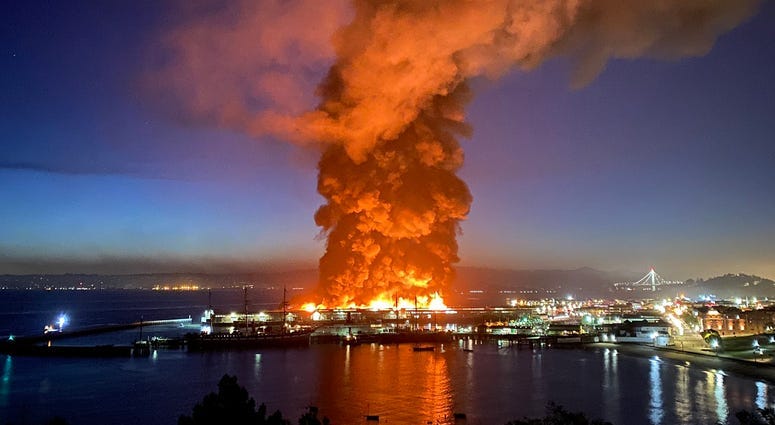 Over 100 firefighters and 50 rigs are battling a large, four-alarm fire at a warehouse building at historic Fisherman's Wharf in San Francisco.

Multiple 911 calls came in at about 4:15 a.m. Saturday about the concrete building, not used for tourism on the rear end of Pier 45, directly behind Fisherman's Grotto and Alioto's Restaurant.

Black smoke spread quickly across the eastern part of the city and could be seen for miles. The wild flames even damaged the first San Francisco Fire Department truck that made it to the scene.

San Francisco Fire Department Lt. Jonathan Baxter tells KCBS Radio part of a wall at the cement warehouse structure quickly collapsed, but no one was hurt when that happened. Firefighters were able to reposition their rigs and continue fighting the fire. 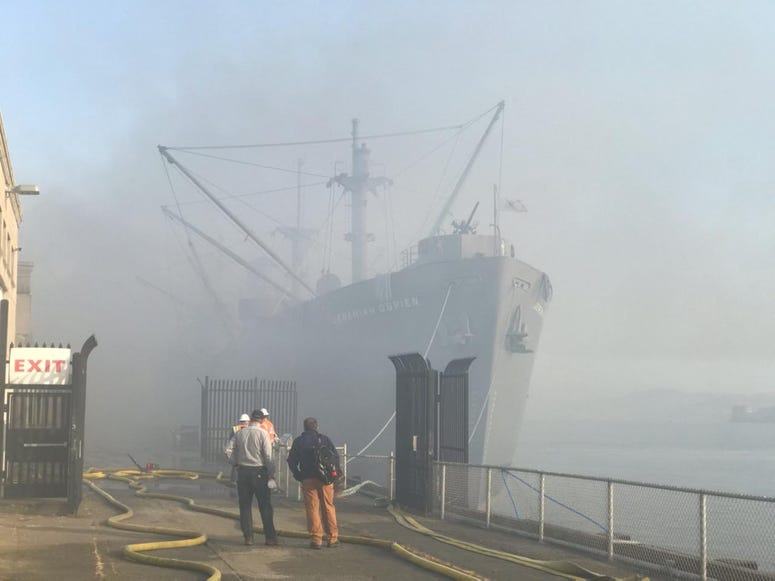 The historic SS Jeremiah O'Brien Liberty ship was initially threatened by the fire, but was ultimately saved from the flames by the fire boat St. Francis. The St. Francis was put in a defensive position to protect the historic ship and was launched from The Embarcadero.

"Our aggressive and swift actions saved the Jeramiah O'Brien, which if we're looking for one positive to come out of this tragic event, saving a historic World War II vessel at the beginning of Memorial Day weekend is something we should all be proud of as a community," Lt. Baxter said.

The O'Brien is one of two remaining fully-functional Liberty ships built and launched during World War II. It is permanently docked at Pier 45.

The ship is thought to have smoke damage and blistering paint, according to Jeremiah O'Brien Senior Ship Keeper Phil O'Mara.

A ticket booth, forklift and the mooring lines were lost to the fire. 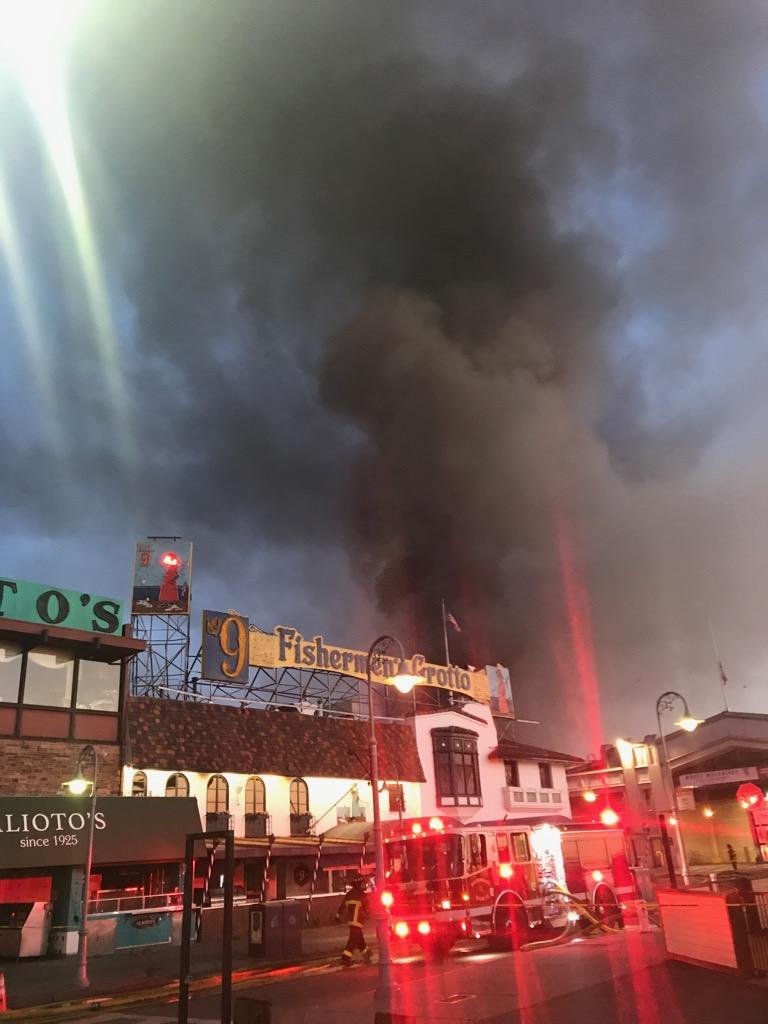 This part of the pier is traditionally used for fish processing and crab pots, along with vehicle and equipment storage.

Javier Ruiz drives for Ohana Seafood in Modesto and was at Fisherman's Wharf early Saturday to transport fresh fish.

"The shed that was leveled houses some of the equipment for the seafood processing operations right there on Pier 45," Ruiz told KCBS Radio's Tim Ryan. "So it had some vehicles for distribution, some larger, some smaller."

The front of Pier 45 is home to Musée Mécanique, one of the largest collections of mechanical instruments in the world. Lt. Baxter has confirmed it remains largely undamaged.

Many of the restaurants in the area also avoided major damage, but fishing industry officials fear this event could be devastating for the business.

"We are happy to say that we have no reports of exposures (to fire) or damage to other buildings around Pier 45," Lt. Baxter said.

The rear structure that initially caught on fire has been completely destroyed.

No word on how the fire started. No injuries have been reported.

The rear structure that initially caught on fire has been completely destroyed. An inspection team is working to ensure there are no imminent structural issues that could lead to another collapse.

"We have small vessels on the waterway that are being pushed away by U.S. Coast Guard and (the San Francisco Police Department)," Lt. Baxter said of the many onlookers in the area. "We're asking the public, if you're on a small vessel, to please avoid the area. We're asking swimmers in the Aquatic Park area to vacate the water and stay out of the Bay as we fight this four-alarm fire. This is a precaution only, but it helps us maintain a safe barrier while we fight this fire, which is still an active four-alarm fire."

There is a massive fire at Fisherman’s Wharf right now —one of the piers #sf #SanFrancisco #sffire #SanFranciscoFire pic.twitter.com/rffAFUWuWA