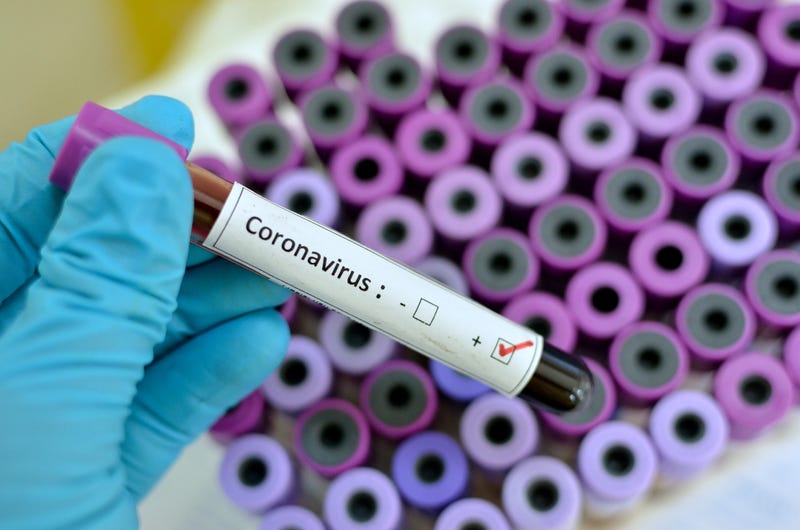 CHICAGO (WBBM NEWSRADIO) -- Illinois health officials announced Friday a case of the coronavirus has been confirmed in Chicago.

This brings the total number of U.S. cases to two, as Chinese health officials work to contain the outbreak.

U.S. health officials are currently monitoring 63 other potential cases. According to the CDC, the cases are being investigated cross 22 different states, including the first patient in Washington state and the new case in Illinois.

According to the Illinois Department of Public Health, the patient is a female in her 60s. She traveled to Wuhan, China in late December, which is the epicenter of the outbreak.

She flew back to Chicago on Jan. 13 and began experiencing symptoms a few days after arriving home, health officials said.

The woman called her doctor after symptoms arose and she was admitted to a hospital and placed in isolation, health officials said. Further testing confirmed the virus.

The woman called her doctor after symptoms arose.

"This is exactly what any potentially ill returning traveler from Wuhan should do. Call ahead and seek medical care," said Commissioner of the Chicago Department of Public Health Dr. Allison Arwady.

She was admitted to a hospital and placed in isolation, health officials said. Further testing confirmed the virus.

She has been reported to be doing well and is in stable condition. The woman remains hospitalized primarily for infection control, health officials said.

“CDC believes the immediate risk to the U.S. public is low at this time, but the situation is evolving rapidly,” said Dr. Nancy Messonnier, the director of the National Center for Immunization and Respiratory Diseases.

Commissioner of the Chicago Department of Public Health Dr. Allison Arwady reiterated that statement, saying this is a "single travel-associated case, not a local emergency...I can reassure you that even with this Chicago case, the health risk to the general public from novel coronavirus remains low at this time, both nationally and in Chicago.

"There is no need for the general public to change their behavior in any way, based on this news."

Dr. Arwady said the patient has been helpful in the case. The woman is said to have not been symptomatic when flying.

"Based on what we know now about this virus, our concern for transmission before symptoms develop is low," Dr. Arwady said.

The woman is said to have limited close contacts, all of whom are currently well and who will be monitored closely for symptoms. The health care workers who have cared for and continue to care for the woman will also be monitored.

"Since returning from China, the patient has had very limited movement outside of her home," Dr. Arwady said. "Now that this test is positive, we will continue to collect and confirm even more information about her activities and contacts; but we know already, for example, that she has not taken public transportation, she has not attended any large gatherings, and actually to our best knowledge at this point, she has not had extended close contact with anyone outside her home since returning from China and prior to admission to the health care system."

O'Hare officially began screening travelers arriving from China this week. Customs and Border Patrol said that the screening at O’Hare should be fully operational by Friday.

According to CBS 2, a group of University of Wisconsin-Platteville students passed through O’Hare International Airport after returning to the U.S. from Wuhan, China and were being watched Thursday night for coronavirus.

UW-Platteville said Thursday that six students arrived on campus Tuesday after traveling recently to Wuhan. Two of the six students live in Wuhan, the university said. According to CBS affiliates in Milwaukee and Madison, UW-Platteville officials said the two Wuhan residents were screened at O’Hare. None of the six students have shown signs of coronavirus infection, but their temperatures are being taken regularly as a precaution.

On Tuesday, the CDC confirmed the first case in the U.S. in Washington state. The man has been quarantined in a hospital outside of Seattle after flying back from Wuhan, China.

Hundreds of cases of a new viral respiratory illness have been confirmed in China and elsewhere since an outbreak began last month in Wuhan. Scientists have identified the illness as a new kind of coronavirus, according to AP. Coronaviruses are a large family of viruses, some of which cause the common cold. Others have evolved into more severe illnesses, such as SARS and MERS, although so far the new virus does not appear to be nearly as deadly or contagious.

WHAT ELSE IS NEW TODAY

— The number of confirmed cases rose to 830. Twenty-six people have died, including the first two deaths outside Hubei.

— After Wuhan halted all outbound flights, trains, buses and ferries on Thursday, 12 other cities in the central province of Hubei followed suit, with a combined population of more than 36 million now under lockdown.

— Wuhan is swiftly building a 1,000-bed hospital dedicated to the disease. The prefabricated structure, slated for completion Feb. 3, is modeled after the Xiaotangshan SARS hospital in Beijing. The SARS hospital was built from scratch in 2003 and featured individual isolation units that looked like rows of tiny cabins.

—- The new virus claimed its youngest victim. A 36-year-old man in Hubei was admitted to the hospital earlier this month after suffering from fever for three days. He died following a sudden cardiac arrest on Jan. 23.

— South Korea and Japan both detected their second cases, and Singapore two more for a total of three.

— Hospitals in Wuhan are grappling with a flood of patients and a lack of supplies. At least eight hospitals in Wuhan issued public calls for donations of masks, googles, gowns and other protective medical gear, according to notices online.