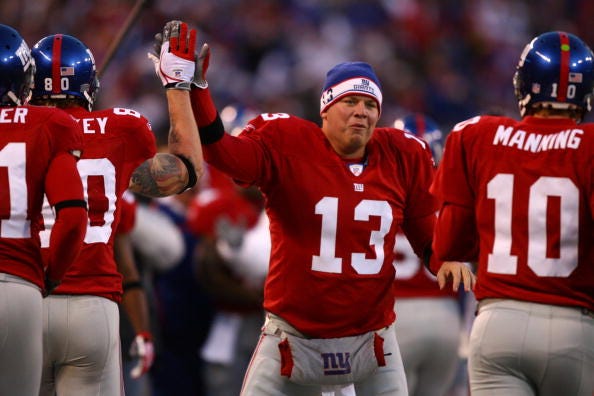 Former NFL quarterback Jared Lorenzen passed away on Wednesday at the age of 38, his family announced.

Lorenzen was hospitalized on Friday and placed in the ICU with kidney and heart failure. His family continued to release updates on his status before releasing a statement Wednesday afternoon through Kentucky Sports Radio host Matt Jones.

"It is with heavy hearts that the family of Jared Lorenzen, would like to extend our sincere thanks and apprecation for all of your support and prayers over the past 6 days," they said. "We are deeply saddened to announce the passing of Jared today, July 3, 2019."

Here is a statement from the family of Jared Lorenzen pic.twitter.com/vTJn2gdNU5

Lorenzen was a star quarterback at the University of Kentucky and played two seasons in the NFL as a backup to Eli Manning for the New York Giants from 2006-07 where he appeared in four games and threw eight passes. He won a Super Bowl ring with the Giants as part of team that defeated the New England Patriots in Super Bowl XLII.

Lorenzen, whose nicknames included the "Hefty Lefty" and "Pillsbury Throw Boy," struggled with his weight during and after his NFL career. He revealed in 2017 that his weight spiked to 500 pounds and sought to educate children to live healthy lifestyle.