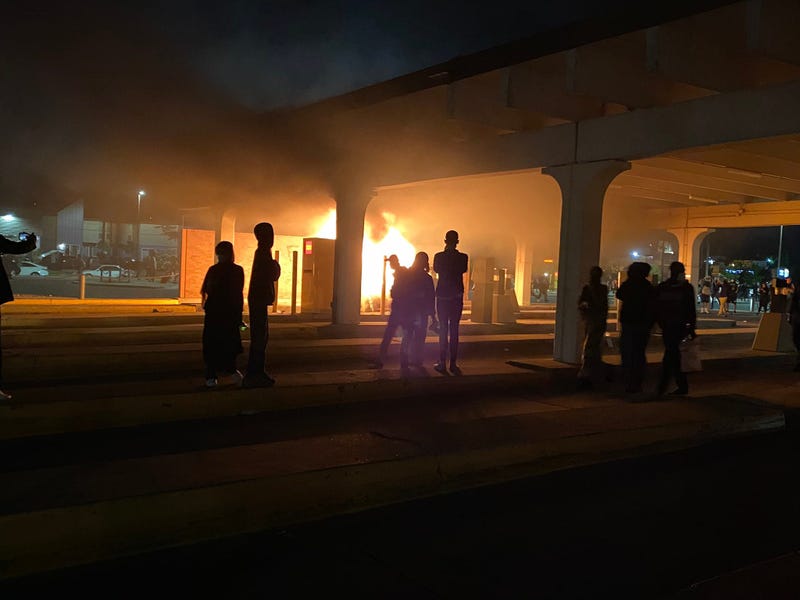 Protests over the death of George Floyd spilled into a fourth day, causing curfews to be enacted across the city.

Volunteers gathered across Minneapolis and St. Paul to clean up in the morning:

People in Minneapolis are out cleaning up after two nights of rioting
pic.twitter.com/gV69WUAopb

The officer kneeling on George Floyd’s neck, Derek Chauvin, was arrested and charged with third-degree murder.

'It Was A Relief:' George Floyd's Fiancee Speaks Out After Derek Chauvin’s Arrest https://t.co/1PY8hQecSf pic.twitter.com/5YNkhgh3Lc

Stephen Jackson with just about the most powerful words I’ve ever heard pic.twitter.com/7guc6O4T6W

Peaceful protests were held at the government center:

This is just the very tail end of a massive crowd heading north on Chicago in front of US Bank Stadium. Curfew begins at 8 pic.twitter.com/j0EsJipzc1

But no law enforcement members were at the intersection of Lake Street and Park Avenue, where several fires were lit:

Car fires are spreading to buildings nearby at Park and Lake. Big crowd dodging speeding cars on Lake Street. No signs of police, National Guard, State Patrol or firefighters. pic.twitter.com/rL15aoehcK

Chaos here on Lake Street - a gas station is on fire and rioters have allegedly thrown propane tanks into the building. pic.twitter.com/m2RcbRB0dJ

As the night carried on, the protestors on I-35W looted a UPS truck passing through and set a fire:

Protestors on I-35W just jumped in the back of a UPS truck, taking some items out as the truck pulled through southbound. @kare11 pic.twitter.com/bYQk7hC6hh

Fire is set on 35W in downtown Minneapolis as protesters continue to occupy the freeway. | WATCH LIVE: https://t.co/zCQBVlyZ4P pic.twitter.com/4IeDlS9Rni

The @Kmart on Lake Street is being looted right now. pic.twitter.com/zO4A9OYvL0

The K-Mart on Nicollet, which was supposed to be demolished in the next few months, is now being looted. @kare11 pic.twitter.com/Cpz1K0KNzo

This was a video of the hibachi restaurant on fire at Lake and 1st Ave. Apologies for poor quality pic.twitter.com/3VvAPgBJ3q

Protestors and law enforcement clashed at the 5th Police Precinct, where over 350 police officers and members of the national guard were deployed to defend the precinct:

Breaking. The National Guard is moving in on the rioters at the 5th Precinct in Minneapolis.

Just took this picture from our deck a little over a mile south of the 5th Precinct. pic.twitter.com/lb8ecmJirX

And finally a message of hope and love for Minneapolis:

Downtown Minneapolis has a message we all need right now. pic.twitter.com/G8M4myRWhc