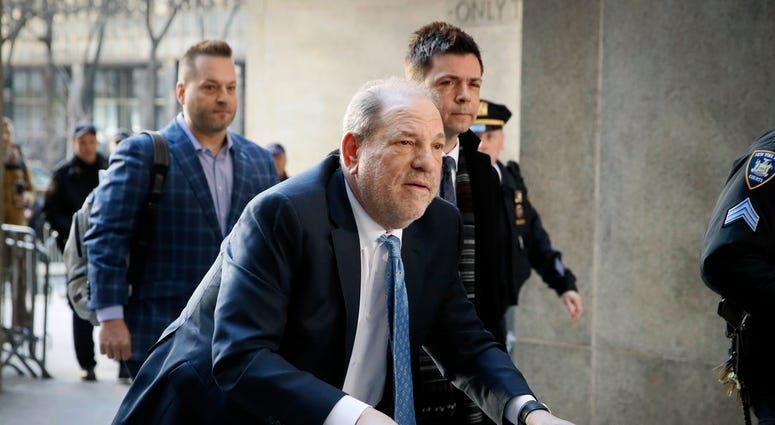 Disgraced movie mogul Harvey Weinstein was sentenced to 23 years in prison for rape and sexual assault on Wednesday.

Weinstein faced at least five years and up to 29 years behind bars after being convicted of raping an aspiring actress in 2013 and forcibly performing oral sex on former TV and film production assistant Mimi Haleyi in 2006. A second criminal case is pending in California.

Last month, the jury of seven men and five women took five days to find Weinstein guilty of raping an aspiring actress in a New York City hotel room in 2013 and sexually assaulting production assistant Mimi Haleyi at his apartment in 2006 by forcibly performing oral sex on her.

He was acquitted on the most serious charges, two counts of predatory sexual assault, each carrying up to life in prison. Both of those counts hinged on the testimony of “Sopranos" actress Annabella Sciorra, who said Weinstein barged into her apartment, raped her and forcibly performed oral sex on her in the mid-1990s.

Onlookers applauded the two women whom Weinstein was convicted of assaulting as they arrived in court.

Haleyi broke into tears as she told Judge James Burke that the 2006 attack scarred her deeply, made her rethink her career in the entertainment business and left her feeling paranoid and afraid of retaliation. She said she avoids dating because she doesn’t want to hurt people, have them feel embarrassed or distance themselves when they find out what happened to her.

The once-aspiring actress that Weinstein was convicted of raping in 2013 recalled the moment during the trial when she left the witness stand in tears and then could be heard screaming from an adjacent room.

“The day my screams were heard from the witness room was the day my voice came back to its full power,” she said.

“It takes a very special kind of evil to exploit connections to leverage rape,” she added.

She said she was a victim of “rape paralysis” caused by a physically imposing assailant “who had every advantage over me."

She added, “Rape is not just one moment of penetration. It is forever.”

Weinstein, who has maintained that any sexual any sexual activity was consensual and opted not to testify at his trial, also addressed the court.

"I had wonderful times with these people," he said. "There are so many people ,thousands of people, who would say great things about me."

Prosecutors asked for a sentence at or near the maximum.

Weinstein’s lawyers were seeking the minimum sentence of five years in prison because of his age and frail health. Attorney Arthur Aidala told the court the ex-mogul was a "broken-down man."

Weinstein, who turns 68 next week, used a walker throughout the trial following recent back surgeries. After his Feb. 24 conviction, he split time between a hospital and a jail infirmary unit, and had a stent inserted last week to unblock an artery.

Four other women who testified against him, including “Sopranos” actress Annabella Sciorra, sat side-by-side in the courtroom audience but weren't permitted to speak at his sentencing under state law.

One of those witnesses, Tarale Wulff, who accused Weinstein of raping her in 2005, said in a statement Tuesday that she hoped that the sentence “sends a clear message that times have changed.”

The executive behind such Oscar-winning films as “Shakespeare in Love” and “Pulp Fiction” became Exhibit A for the #MeToo movement after years of whispers about his alleged behavior burst into public view in The New York Times and The New Yorker in 2017.

More than 90 women, including actresses Gwyneth Paltrow, Salma Hayek and Uma Thurman, eventually came forward to accuse Weinstein of sexual assault and sexual harassment. The takedown energized the #MeToo campaign of speaking up about sexual assault and holding perpetrators accountable.

Weinstein was acquitted of first-degree rape and two counts of predatory sexual assault stemming from Sciorra’s allegations of a mid-1990s rape.

Newly unsealed documents show the 67-year-old former film producer sought help from billionaires Jeff Bezos and Michael Bloomberg as sexual misconduct allegations against him piled up in October 2017, and that he considered issuing a statement at the time claiming that he was suicidal. There is no evidence to suggest either man responded.

After sentencing, Weinstein will be transferred to the state prison system.

Martin Horn, a former city corrections commissioner, said Weinstein’s celebrity status could make him a target for another inmate looking to make a name for himself, while the gravity of his convictions and sentence could raise suicide concerns.

“They're going to make sure that nothing happens to him while he's in their custody. Not because he's important, but just from a public relations point of view, it would be awfully embarrassing," said Horn, who now teaches at John Jay College of Criminal Justice.

Just as jury selection was about to get under way in the New York case in January, Weinstein was charged in California with raping a woman at a Los Angeles hotel on Feb. 18, 2013 and sexually assaulting a woman in a Beverly Hills hotel suite the next night.

The Associated Press Contributed to this report.