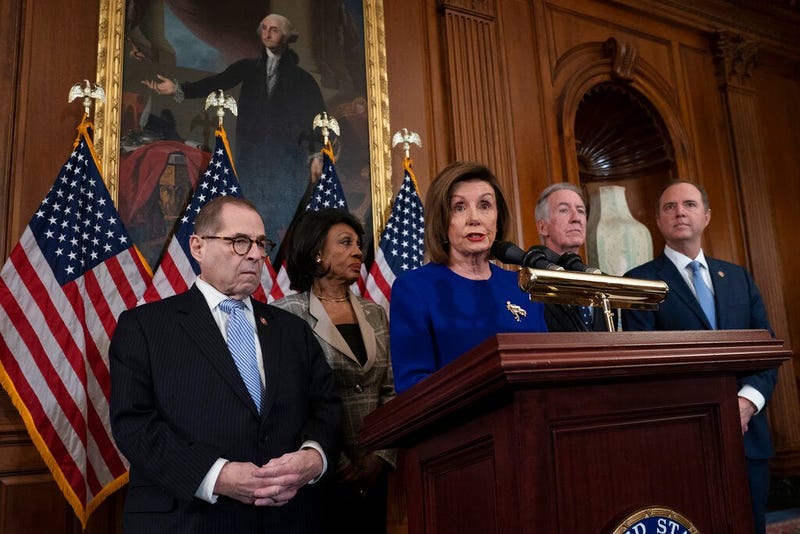 Members of the House Judiciary Committee passed both articles of impeachment against President Donald Trump on Friday morning. The House Panel advanced the impeachment articles, while the full House vote is expected next week.

The House Democrats were back in session again on Friday morning, as they prepared to vote on impeachment articles against President Trump.

Members began a second day of marathon debating the articles of impeachment against the President Thursday morning.

The marathon debating still continued on Thursday afternoon -- all before the committee prepared to vote to send the articles of impeachment to the full House.

The committee is debating over Republican-introduced amendments before voting whether to send the articles to the full House.

The House Judiciary Committee will be considering the amendments to the articles of impeachment today. The House will vote sometime next week before the holidays.

On Wednesday, the House Democrats started the tough work of finishing their articles of impeachment against President Trump.

The House Judiciary Committee is meeting right now to amend or markup the legislation introduced by House Speaker Nancy Pelosi.

The session to follow the markup started at 6:00 a.m. PST.

Opening remarks were made by Chairman Nadler and Georgia Rep. Doug Collins.

According to an Axios story, Nadler said in his opening remarks "Under Article I, the President can be impeached for high crimes and misdemeanors.   The highest of high crimes is abuse of power.  It occurs when a President uses his official powers to serve his own personal, selfish interests at the expense of the public good.  To the founding generation that had fought a king and won our freedom, it was a specific, well-defined offense.  The first article of impeachment charges President Trump with abuse of power.  The article describes President Trump’s conduct and lays out two aggravating factors that we must consider:  in pressuring Ukraine for a personal favor, President Trump both betrayed our national security and attempted to corrupt our elections.  When the President weakens an ally who advances American security interests by fighting an American adversary, the President weakens America."

He said "If our elections are corrupt, everything is corrupt. "

Rep. David Cicilline of Rhode Island asked Republicans standing by Trump to “wake up” and honor their oath of office. Republican Rep. Mike Johnson of Louisiana responded with his own request to “put your country over party." Rep. Lou Correa, D-Calif., shared his views in both English and Spanish.

Meanwhile, Republicans protested the hearing saying that there wasn't enough evidence present and the Democrats have wanted President Trump out of office since he won the 2016 election, according to NPR.

Rep. Collins said "what you need to continue to say is 'we can't beat him next year. The only thing we need is a 30-second commercial saying 'we impeached him.''  That's the wrong reason to impeach somebody and the American people are seeing through this."

This is only the fourth time in U.S. history that articles of impeachment have been brought against the president.

“Do we have Abuse of Power? Yes, Adam Schiff.

Do we have Obstruction of Congress? Yes, House Democrats.

This is a political hit job (against President @realDonaldTrump).” - @GReschenthaler pic.twitter.com/m56LyLSVZl

During a press conference on Tuesday morning,  Chairman Jerrold Nadler said "The President holds our national trust.." saying the House Democrats were "charging the president of the United States Donald J. Trump with committing high crimes and misdemeanors. The first article is for abuse of power and it is an impeachable offense for the president to exercise the powers of his public office to obtain an improper personal benefit while ignoring or injuring the national interest. That is exactly what President Trump did when he solicited and pressured Ukraine to interfere in our 2020 presidential election."

The markup includes proposed changes by committee members in preparation for a vote on whether or not the impeachment will be sent to the full House.

"That will depend on the number of amendments that the Republicans try to attach to it. It will be, in some respects, a traditional markup ... but remember, there's only two articles," said Rep. Veronica Escobar, D-Texas, on Tuesday.

To Impeach a President who has proven through results, including producing perhaps the strongest economy in our country’s history, to have one of the most successful presidencies ever, and most importantly, who has done NOTHING wrong, is sheer Political Madness! #2020Election

At a recent Trump rally in Hershey Pennsylvania, supporters debunked all ideas that the president may have committed any acts that would justify impeaching him. Many went on to say that were the president removed from office, the country could be torn apart. Some even spoke about potential violence.

Trump supporters at the president's rally in Hershey, Pennsylvania tell CBS News their thoughts on impeachment and the possibility of his removal: "It would become the second Civil War." https://t.co/jPUmfWREbX pic.twitter.com/bzT0v9oaWN