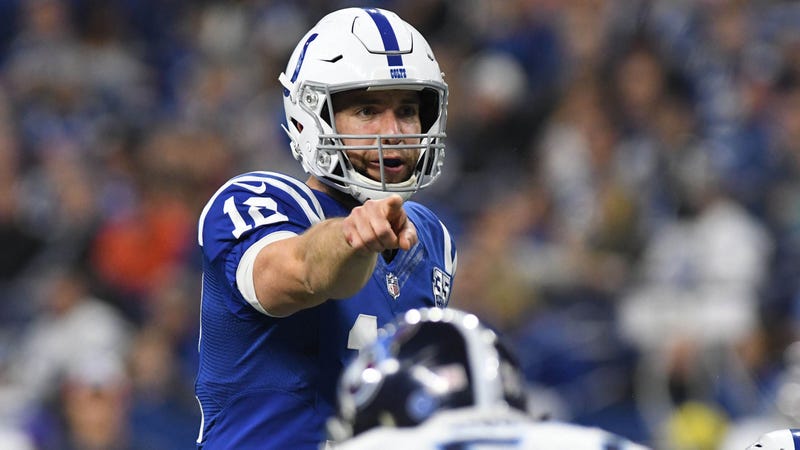 The playoffs essentially start Sunday night with this Week 17 play-in game. The winner of this game between the Indianapolis Colts and the Tennessee Titans reaches the postseason -- likely as the No. 6 seed in the AFC. But if the Houston Texans happen to lose to the Jacksonville Jaguars, the Colts-Titans winner becomes champion of the AFC South and gets a home game next week in the opening round of the playoffs. The really wild scenario is a tie, which could mean both teams miss the playoffs. The Titans are 6-1 at home, but don’t always produce a sellout crowd. The Colts have not been a good road team. A lot will hinge on the health and the play of Titans quarterback Marcus Mariota, who is nursing several injuries.

The Colts are lucky to be in a play-in game situation after nearly losing to the New York Giants last week. They prevailed, 28-27, with a fourth-quarter comeback. Andrew Luck, behind a stellar offensive line, has thrown for 4,308 yards and 36 TDs in a tremendous comeback season following a shoulder injury last season. Marlon Mack and Nyheim Hines pace the run game, T.Y. Hilton (seven catches and 138 yards last week) is Luck’s favorite wideout and TD-machine tight end Eric Ebron is headed to the Pro Bowl. On the other side of the ball, Darius Leonard was a monster Pro Bowl snub. The rookie leads the NFL with 155 tackles.

Mariota returned to practice Thursday, but just how healthy will he be? If Blaine Gabbert starts for the Titans, it’s a wrap. Gabbert isn’t reliable enough throwing the ball down the field and avoiding turnovers. The Titans might hand the ball to star running back Derrick Henry 30 times and ask him to get them to the playoffs. Henry leads the NFL since Week 14 with 492 rushing yards and seven rushing TDs. They also have to get more production from former New England Patriots third-down back Dion Lewis, who has been a disappointment in his first season in Tennessee. Wesley Woodyard is the spy for Luck on defense, and has to keep him from running outside the pocket. The Titans don’t have much of a pass rush, so they need their secondary to deliver and potentially force a turnover or two. This is going to be a tight, hard-fought battle in Nashville.