The National Hurricane Center now says the eye of Hurricane Laura will make come ashore early Thursday in Texas, just across the state line with Louisiana.

That puts Louisiana on the side of the storm with some of the most intense impacts. 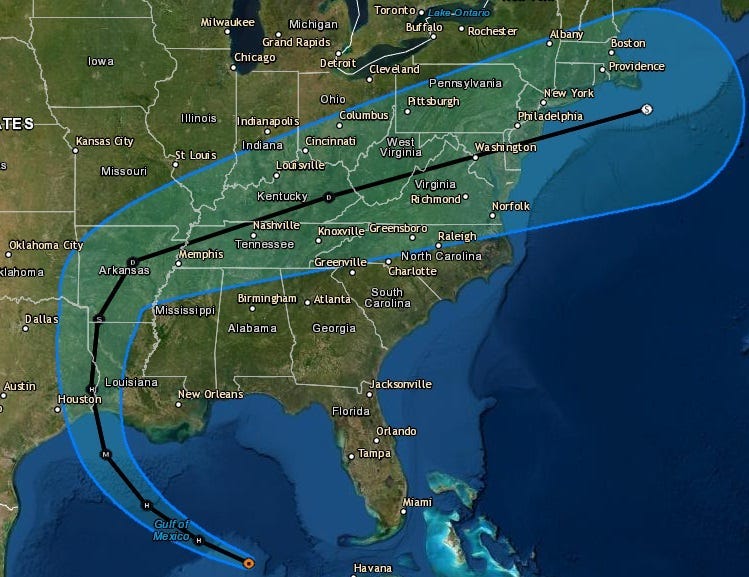 "Significant strengthening is forecast during the next 36 hours, and Laura is expected to be a major hurricane at landfall."

The forecast calls for 115 mile per hour winds as Laura roars ashore.

That would mean a 13 foot wall of water pushing inland, deep enough to completely cover one story structures.  The storm surge is forecast to be up to six feet as far east as the mouth of the Mississippi River.

Rainfall near the eye could exceed one foot with isolated higher amounts and in the New Orleans area widespread up to four inches with higher isolated amounts.

The combination of a dangerous storm surge and the tide will cause normally dry areas near the coast to be flooded by rising waters moving inland from the shoreline. The water could reach the following heights above ground somewhere in the indicated areas if the peak surge occurs at the time of high tide...

The deepest water will occur along the immediate coast near and to the right of the landfall location, where the surge will be accompanied by large and destructive waves. Surge-related flooding depends on the relative timing of the surge and the tidal cycle, and can vary greatly over short distances.

—Western Cuba...Additional totals of 1 inch or less.
—United States...From Wednesday night into Saturday, Laura is expected to produce rainfall of 4 to 8 inches, with isolated maximum amounts of 12 inches across portions of the west-central U.S. Gulf Coast from western Louisiana into east Texas, and northward into portions of the lower to middle Mississippi Valley, lower Ohio Valley, and Tennessee Valley. This rainfall will cause widespread flash and urban flooding, small streams to overflow their banks, and minor to isolated moderate river flooding.

Swells generated by Laura are affecting portions of Cuba, the central Bahamas, and the Florida Keys. Swells are expected to spread northward along portions of the west coast of Florida peninsula and the coast of the Florida panhandle later today and tonight, and reach the northern and northwest Gulf coast by Wednesday. These swells are likely to cause life-threatening surf and rip current conditions.