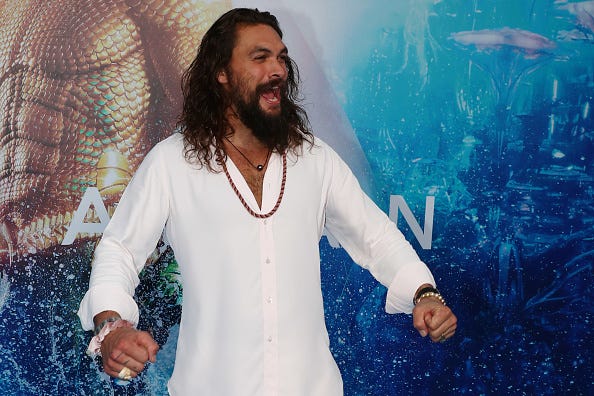 Aquaman has shaved his beard!

Jason Momoa is cleaning up the oceans and the land…and his face. He’s just posted a video to YouTube where he’s seen standing in the middle of plastic bottle-infested land while shaving his beard using his front-facing iPhone camera as a guide.

But the whole ordeal is an effort to raise awareness for a good cause – ditching the plastics and switching to “infinitely recyclable” aluminum. The video aims to create some buzz around a not-yet-launched line of canned waters by Momoa and Ball Corporation that come in four different varieties – still, alkaline, sparkling, and spring.

He takes a swig of the canned still water and says into the camera, “it’s just water but I feel good about it because I know I’m gonna recycle this.” The video is full of facts about how long plastic will sit in our environments and oceans along with reasons why aluminum is the better option for all.

Goodbye DROGO, AQUAMAN, DECLAN, BABA New YouTube episode please subscribe and share this video. LINK in BIO . I’m SHAVING this beast off, It’s time to make a change. A change for the better...for my kids, your kids, the world. Let’s make a positive change for the health of our planet. 🌎 Let’s clean up our oceans 🌊 our land ⛰. Join me on this journey. Let’s make the switch to infinitely recyclable aluminum. ♻️♻️♻️ Water in cans, not plastic. #ChangeisComing #mananalu #aluminum #aluminumcans #water #cannedwater #choosecans #recycle #plasticpollution #HydrateLike @ballcorporation shot on the amazing GEMINI by @reddigitalcinema and @leitzcine @leicacamerausa Aloha j. I’m sorry @i.am.aurelius does not know how to spell. It’s Infinitely RECYCLABLE. Not recycleable. He’s young. And I’m working. Sorry

Of course, viewers are flocking to the video to see some of their favorite bearded Momoa characters leave the room once and for all. “Goodbye DROGO, AQUAMAN, DECLAN, BABA,” the Instagram caption reads.

According to the comments section of the post, fans don’t mind the switch to a clean-shaven face for Momoa, but most agree that he looks like a completely different person now.

Let’s get our hands on some of those canned waters, now, shall we?