The punishments handed down in the Astros’ sign-stealing scheme have sent shockwaves reverbing throughout Major League Baseball.

After a lengthy investigation by the league, manager AJ Hinch and general manager Jeff Luhnow were each suspended a year for their involvement in the cheating during the 2017 campaign. Shortly after those suspensions came down, the Astros announced that both Hinch and Luhnow had been fired.

Alex Cora was the bench coach on that Astros team, but his punishment hasn’t been announced yet, as the league is still looking into claims that the Red Sox stole signs using their video room during the 2018 season.

Joe Benigno and Evan Roberts discussed the two scandals on their show on WFAN on Monday. Roberts thinks there’s a good chance that Cora receives a lifelong ban from the league.

“They could ban him for life,” said Roberts. “They could! They’ve set the bar … If they were that hard on Hinch, and Cora is the ringleader of this whole thing, and is now a manager with another team and was involved in some other form of cheating, I would not be surprised if Major League Baseball actually came down that hard on Alex Cora.”

According to a November report from the Athletic, Cora played a “key role” in the Astros sign stealing. He was apparently one of the masterminds behind the scheme, which involved Houston players banging on trash cans in order to signal electronically stolen signs to hitters.

The allegations against the 2018 Red Sox are similar to those that were levied against the Astros. Boston is under investigation for allegedly using its video replay room to steal signs during that season. It was a magical year for the Red Sox, as Cora won a World Series in his first year on the job at Fenway Park. 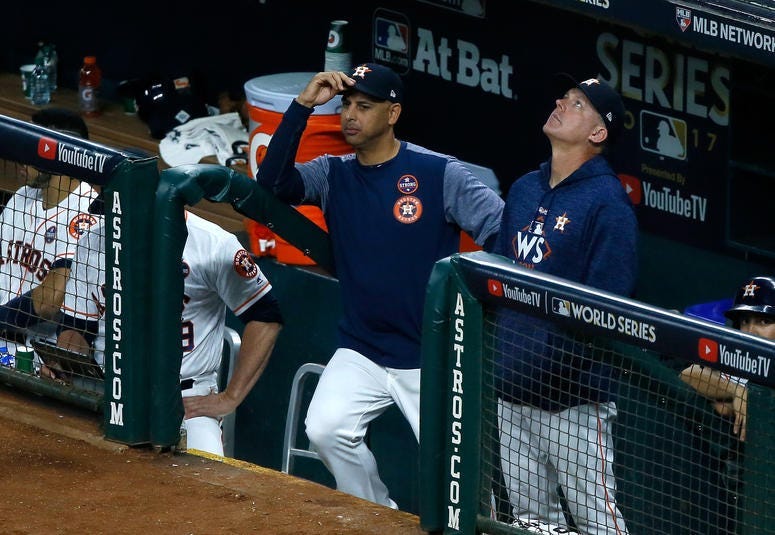 Mets manager Carlos Beltran was also implicated in the report, but he won’t be punished as he was a player on that Astros team and not an official part of management.

Benigno wasn’t surprised that the league chose not to suspend players who were involved.

“Let’s say Jose Altuve was all over this, to throw a name out there. Does Major League Baseball really want to put one of their best players out of commission for a year? A star player? They’re not going to do that.”

Despite the harsh punishment doled out here, Benigno added that he doesn’t think this will solve the problem of cheating in baseball.

“I think you’re going to see teams try to continue to do it and try to do it in as sophisticated a way as they can without getting caught. Maybe for a couple of years it will be curbed, but there’s always going to be somebody again looking for a competitive edge.”

Click on the audio player above to listen to this full segment from the "Joe & Evan" show.