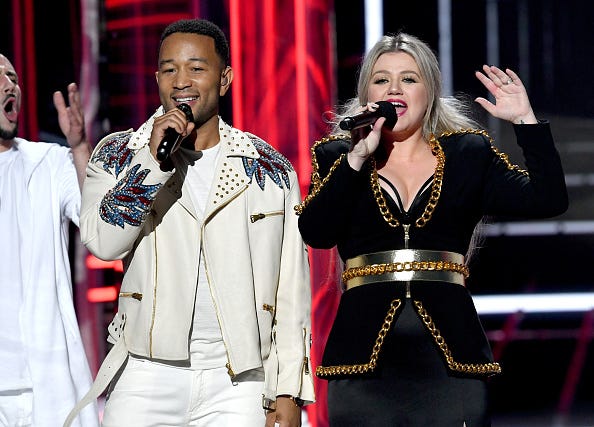 Kelly Clarkson is already playing matchmaker to her 3-year-old.

The “Since You Been Gone” singer revealed she’d love for her son, Remington, to marry John Legend and Chrissy Teigen's 3-year-old daughter, Luna.

We don’t know about weird, but it’s obvious the two families have gotten close since Clarkson and Legend both started working on The Voice together.

And while their kids are a long way from any sort of romance, Clarkson believes one thing that they have in common is their similar Hollywood upbringing.

"I think it's fun to have other kids that kinda grow up in an environment... it's not normal. You know, it's not like an everyday scenario, like how we all grew up," the 37-year-old added. "So I like that they at least get people to hang out with every once in a while... with the same kinda vibe to where they don't feel weird."

In addition to her son, Clarkson has a four-year-old daughter, River, with husband Brandon Blackstock. The Grammy winner is also step-mom to Blackstock’s two children from a previous relationship. Legend and Teigen are also parents to 11-month-old son Miles.

Regardless if their families ever become joined in marriage, they’re destined for a slew of fun musical playdates.