Stunning news out of the Kentucky Derby on Wednesday night as race favorite Omaha Beach was scratched for Saturday’s first leg of the horse racing Triple Crown due to a breathing issue.

That dramatically alters the complexion of the field -- and leaves gamblers to rethink their plays at the betting window.

The new favorite is Game Winner at 9-2, with Improbable and Roadster right behind at 5-1. All three horses are trained by five-time Derby winner Bob Baffert.

Here is everything you need to know about this year’s Run for the Roses, as well as a handy guide to horse racing bets:

1. War of Will 15/1
(Mark Casse/Tyler Gaffalione)
Had three consecutive wins before a terrible ninth-place finish last time out in the Louisiana Derby.

2. Tax 20/1
(Danny Gargen/Junior Alvarado)
Has hit the board in all three of his races, including a win in the Withers in February and runner-up in the Wood Memorial in his last race.

3. By My Standards 15/1
(W. Bret Calhoun/Gabriel Saez)
Has back-to-back wins, the latest in the Louisiana Derby. Has finished top three in all five of his starts.

5. Improbable 5/1
(Bob Baffert/Irad Ortiz Jr.)
Finished second in his last two races and won his first three starts before that.

6. Vekoma 15/1
(George Weaver/Javier Castellano)
Has won three of his four races, including last time out in Lexington at the Blue Grass Stakes.

7. Maximum Security 8/1
(Jason Servis/Luis Saez)
The winner of the Florida Derby is unbeaten in four career starts. Level of competition is the question and he isn’t among the favorites.

9. Plus Que Parfait 30/1
(Brendan Walsh/Ricardo Santana Jr.)
Arrives off a win in the UAE Derby -- but winners of that overseas races have not done well at the Derby. 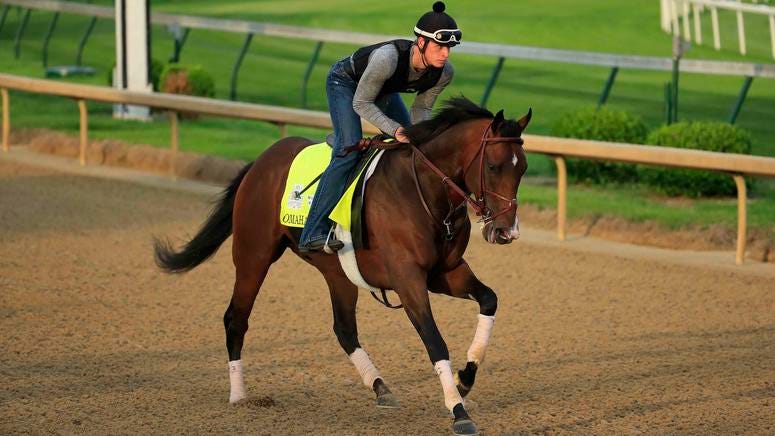 13. Code of Honor 12/1
(Claude McGaughey III/John Velasquez)
Finished top three in four of his five races, including a win in the Fountain of Youth in March.

14. Win Win Win 12/1
(Michael Trombetta/Julian Pimentel)
Two more wins in his name than he has on the track, but he’s hit the board in all four career starts.

15. Master Fencer 50/1
(Koichi Tsunoda/Julien Leparoux)
A new feature allows for the best Japanese horse to gain entry. Most are skeptical of the competition he faced to get here.

16. Game Winner 9/2
(Bob Baffert/Joel Rosario)
Winning the Breeders’ Cup Juvenile as a 2-year-old. May have been taking it easy in his two Derby prep races: second-place finishes in the Rebel Stakes and Santa Anita Derby. Beware.

18. Long Range Toddy 30/1
(Steve Asmussen/Jon Court)
Has an upset win over Improbable in the Rebel Stakes, but a sixth-place finish last time out in the Arkansas Derby was his worst start.

19. Spinoff 30/1
(Todd Pletcher/Manny Franco)
Has the burst to hit the board, but he’ll have to go a long way from an outside post.

20. Country House 30/1
(William Mott/Flavien Prat)
Not a contender to win. Finishes of third, fourth and second in his last three races.

The minimum bet for these three types of wagers is $2.

Win bet: If the horse you pick wins the race, you cash in. Simple.

Place bet: In order to cash this ticket, your horse needs to finish in first or second place. Does not pay out as much as a win bet.

Show bet: Pays out if your horse finishes in first, second or third place. Even lower payouts.

To make the most money at the track though, try these “exotic” wagers. $1 is usually the minimum bet for exotics, sometimes cheaper.

Exacta: To win this bet, you have to correctly predict the first and second place horse in the exact order of finish. You can pick more than two horses to increase your chances of hitting the exacta, but that also increases the cost of making the bet.

Trifecta: Requires you to predict the top three horses in order of finish

Superfecta: The top four in order of finish. The $1 superfecta paid out more than $400,000 at the 2005 Kentucky Derby. But consider this a lottery ticket.

One last thing to remember: Unlike most sports gambling, in which your odds are locked when you place a bet, in horse racing, the odds are only finalized when the gate opens and the race begins.