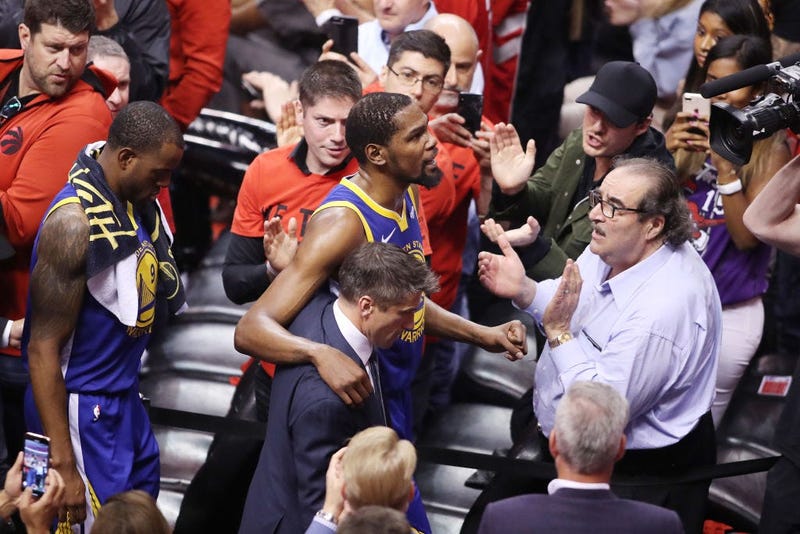 "Hell no," Durant said, per Haynes, who visited the new Brooklyn Net in Los Angeles.

Durant strained his calf against the Houston Rockets in the Western Conference semifinals and did not return to the court until Game 5 of the NBA Finals against the Toronto Raptors with Golden State trailing the series, 3-1.

Durant's decision to depart the Warriors for the Brooklyn Nets unleashed a tidal wave of moves for Golden State, including a sign-and-trade that sent D'Angelo Russell from Brooklyn to San Francisco and veteran stalwarts Andre Iguodala and Shaun Livingston jettisoned off the roster. Golden State also picked up Willie Cauley-Stein, the most noteworthy of myriad lesser transactions.

Durant played 12 minutes and scored 11 points in that time before he collapsed to the ground with what was later revealed to be a torn Achilles. It was the last game Durant would play for the Warriors, who lost the Finals in six games to Toronto.

There had been some speculation that how the Warriors handled Durant's calf injury was why he left Golden State.

"How can you blame (the Warriors)?" Durant continued.

"Hell, no. I heard the Warriors pressured me into getting back. Nobody never said a word to me during rehab as I was coming back. It was only me and (Director of Sports Medicine and Performance) Rick (Celebrini) working out every day. Right when the series started, I targeted Game 5."

When Durant went down and limped off the court, the Raptors fans began cheering that the Warriors star was hurt, but Durant said he was in a daze and does not recall much of the crowd reaction.

Still, he had a parting shot for the fans at ScotiaBank Arena that night:

“It will probably be the last time they will be in the Finals."