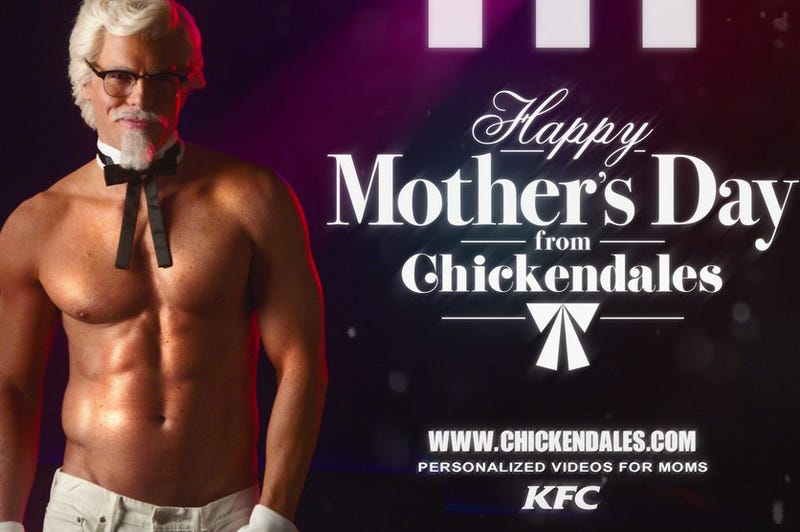 Still don’t know what to get your mom for Mother’s Day? Well good news, your search is over. As long as your mom is into fried chicken-themed burlesque.

KFC continues to “innovate” in the fast food adjacent space with its newest release for Mother’s Day: Chickendales. Yes, that is a combination of chicken and Chipendales. No, it’s not quite as strange as that sounds.

At chickendales.com you fill in your mom’s name and what state she is from and let KFC and its band of The Colonel dancers do the rest. At the top of the video the leader of the group mentions your mom by name (just thinking about how long it must have taken him to record almost every name in the English language is exhausting) and then he and his crew do a sexy, fried chicken themed striptease for her. Even if you aren’t going to share it with your mom, it’s worth putting in her information to see oh-so-sexy, extra crispy results.

This is far from the first time KFC has done a publicity stunt with some serious production value behind it. Earlier this year the chain launched the “KFC Innovations Lab” along with IndieGogo to fund things like a hot tub shaped like a giant bucket of chicken and a $2 million Colonel Sanders Ice Capades show. This isn’t even KFC’s first Mother’s Day release. Last year they put out a romance novel featuring Colonel Sanders stealing away with an erstwhile member of the British aristocracy.

It all leaves you wondering what they might cook up for Father’s Day. Recliner with built in fryolator? 11 herbs and spices cologne? Only time will tell.