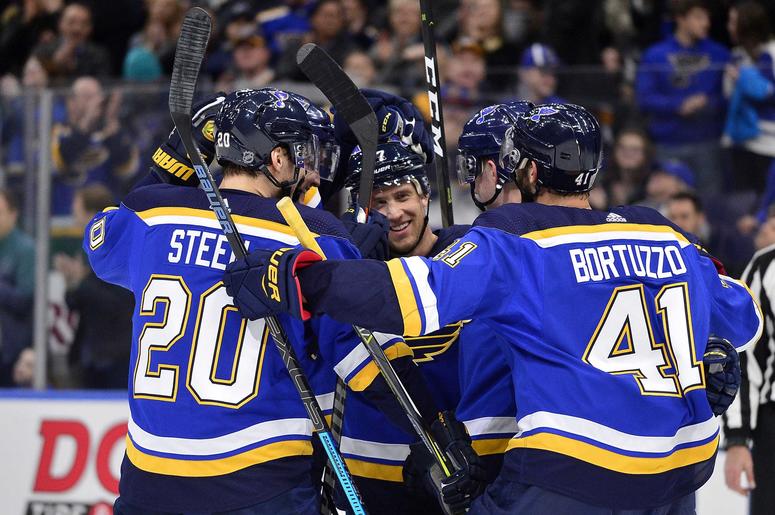 ST. LOUIS, Mo. (KMOX) — Gloria, I think the Blues have got the league's number.

There's been a lot to celebrate with the St. Louis Blues lately. The team is on the way to the Stanley Cup finals, but fans have also noticed a blast from the past blaring in the Blues locker room after wins.

That's "Gloria" by Laura Branigan. It's considered by music fans as her signature song. It stayed on the Billboard Hot 100 for 36 weeks and went platinum, with over a million copies of the single sold. But how did it end up in the St. Louis Blues locker room?

It turns out that the Eagles/Cowboys NFC Wild Card game in Philadelphia on Jan. 6 was the spark that lit the idea. Joel Edmundson was watching the game with Alex Steen, Robert Bortuzzo, Jaden Schwartz, and Robby Fabbri.

"We got together with some friends and watched the game with a bunch of Philly guys who grew up there," Edmundson told stlouisblues.com. "They had a DJ in the bar and whenever there was a commercial break, they would crank the tunes and all these guys from Philly would get up and start dancing around. They played this song Gloria a couple of times, and this one guy looked at the DJ and said 'keep playing Gloria!', so they kept playing it. Everyone would get up and start singing and dancing. We just sat back and watched it happen. Right there we decided we should play the song after our wins. We won the next game, we got a shutout, so we just kept on playing it."

You may not have known that "Gloria" replaced Dion's "Runaround Sue" as the postgame victory locker room song.

"Most of the time, when you try to figure out a song to play, it has something to do with the team or something that happened throughout the year," Steen said. "We started with Runaround Sue, which is a happy song. It's like the feeling you get after wins in our building now (with Runaround Sue playing). It was the same vibe with Gloria - it's an old school song and it puts the boys in a good mood."

"It's great," Edmundson added. "Whenever we come back in the dressing room (after a win), we're yelling 'play Gloria, play Gloria!" It makes us smile and have a good time. It's working, so we're going to keep it."

The St. Louis Blues take on the Boston Bruins in the Stanley Cup Finals, starting Monday May 27th.