It's time to invoke the 25th Amendment.

That's according to Anthony Scaramucci, the former White House Director of Communications, on Tuesday.

The 25th Amendment is when in face of removal, resignation or death of the President, the Vice President would take over.

Scaramucci, who joined the KNX In-Depth show with hosts Charles Feldman and Mike Simpson, used to be one of the most aggressive defenders of President Trump but now the times have changed. The political consultant has called for a Republican to challenge President Donald Trump for the party's nomination for 2020 and has labeled Trump a "bully" and an "embarrassment." Trump has lashed back.

"You're doing the best you can to help the guy and he does things that are absolutely reprehensible and inexcusable. Then you have a choice, your personal integrity is on the line," he said.

He told the hosts that he supports a lot of Trump's policies but there are some caveats like using Twitter to bully fellow citizens or the child separation policy.

He said it's getting worse and "We are now at a breaking, boiling point."

He said the president is mentally unbalanced.

"I'm not hedging that, if I was a Cabinet member I would be going to the other Cabinet members and saying 'hey it's sort of time for the 25th amendment because he is very destructive and obviously mentally imbalanced and unstable.'  If you are asking my personal opinion, if I was on the Cabinet, I would say 'hey it's time for the 25th Amendment, the guy has lost it obviously,'" he said. "But I'm not on the Cabinet."

Despite all the harsh words, Scaramucci says he thinks it is likely Trump will win a second term in the White House.

California Rep. Maxine Waters, who joined the hosts on KNX In-Depth during the August recess a little later, agreed with Scaramucci when it came to Trump's mental wellbeing. She added she's called Trump names too, a "con man," "immoral," "divisive," and much more.

"I'd like to tell you I've gained a lot of respect for Scaramucci based on what you have shared with me," she said. "He does not need to be the President of the United States."

She was on KNX In-Depth to talk about going toe-to-toe with Trump, rising homelessness in Los Angeles and how she is trying to combat that epidemic.

As early as this summer, Waters has called on Trump to resign, saying he gets cozy with dictators aligning himself with North Korea's Kim Jong Un and Russia's Vladimir Putin, while President Trump has called Waters “an extraordinarily low IQ person," "crazy and corrupt."

"He is a deplorable human being so let's just get that on the record in addition to what he may have said about me I have said a lot of things about him," she said. 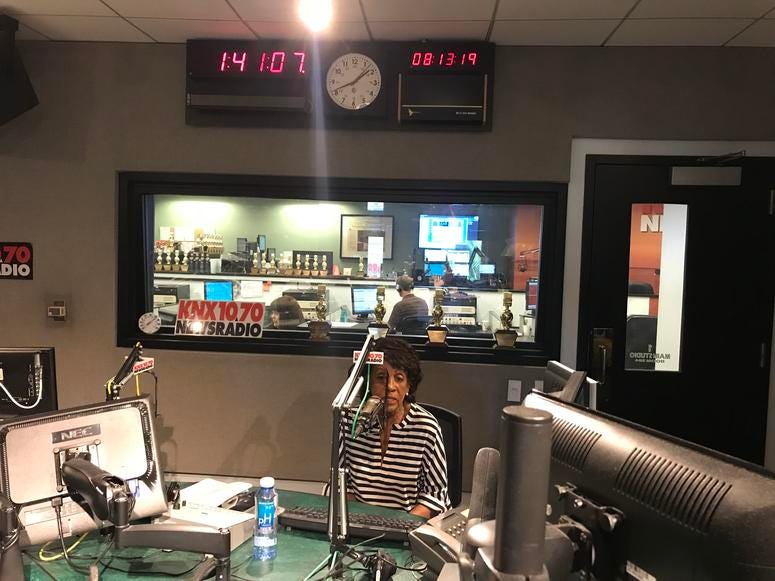 "The democracy is at stake," she said.

She said, "we live here in Los Angeles where we have one of the greatest homelessness crisis in the country." She said when you visit downtown Los Angeles, people are found in tents and cardboard boxes all the way up to City Hall.

Not only that it's happening in south LA, the Valley and San Francisco, she said.

"I am determined we can do better," Waters said adding she has come up with the Ending Homelessness Act of 2019, a $13 billion bill.

On Wednesday, Waters is chairing a special hearing of her House Financial Services Committee in Los Angeles at the California African American Museum at 10 a.m., focusing on an issue that is front and center for her home district: homelessness.  Los Angeles Mayor Eric Garcetti will be a witness in front of her committee.