“Mean Girls” hit the big screen 15 years ago, and Tina Fey, who wrote both the film and the 2018 Tony Award-nominated musical, is keeping the Broadway cast's obsession with the "fetch" movie going strong.

Fey has "awesomely updated jokes" that resonate with this new audience, Krystina Alabado, who plays Gretchen Wieners in the stage adaptation, tells RADIO.COM. Still, the movie was always one of her favorites. "I was definitely one of the people who watched it five million times, over and over and over again."

In fact it's difficult for Kate Rockwell (Karen Smith) to even remember a time when she wasn't quoting the movie's famous lines like "on Wednesdays we wear pink," because she says "it insinuated itself so deeply into our culture so quickly and so seamlessly."

The 2004 comedy made a profound impression on Tony Award-nominee, Grey Henson, who plays Damian Hubbard in the musical. He recalls it being one of the first times he saw an openly gay teenager in a feature film. "Damian was so unapologetically himself and is. And that’s why I think people like him, and that’s why I like him. I think it was something I had to learn to embrace, and I think Damian helped me do that." 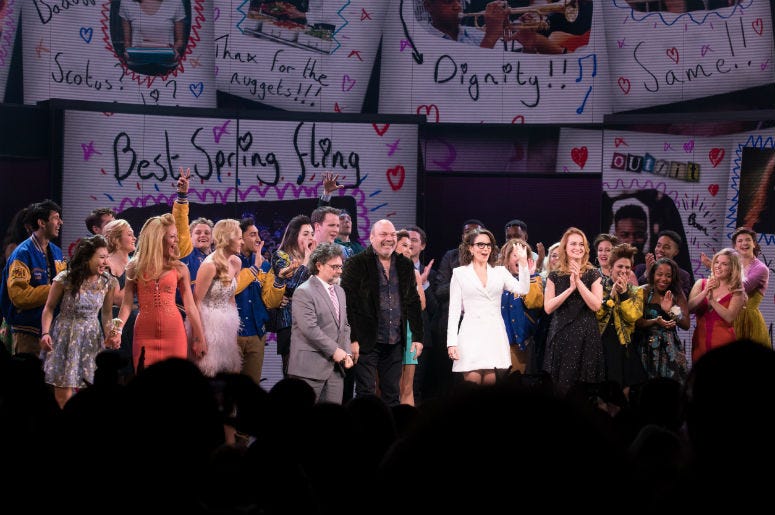 For Barrett Wilbert Weed (Janis Sarkisian) the film, unlike others of its time, actually took issues like bullying and female social hierarchies seriously. “It was the first movie I saw that really made me feel validated in everything I was feeling…”

"It’s a cautionary tale, but it’s not a PBS after school special. It’s not like ‘we’re going to tell you a story about a girl who went down the wrong path’ … It’s just funny," says Erika Henningsen, who plays Cady Heron. She credits Fey’s comedy for making sometimes complex topics digestible on both the stage and the screen. "...It doesn’t feel like you’re watching something that’s trying to be preachy, which, you know, is what Tina Fey is really good at."

“Mean Girls” is playing now at the August Wilson Theatre.