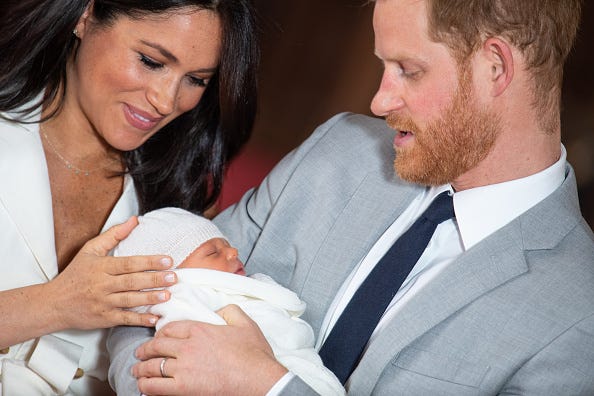 Prince Harry and Meghan Markle will be heading to Africa this fall and they’re bringing along their seven-week-old bundle of joy, Archie Harrison, according to Fox News.

TRH The Duke and Duchess of Sussex are excited to announce that they have been asked to carry out a tour to Southern Africa this autumn. The Foreign and Commonwealth Office have requested a visit to South Africa 🇿🇦 as well as The Duke carrying out visits to Malawi 🇲🇼 and Angola 🇦🇴. His Royal Highness will also do a short working visit to Botswana 🇧🇼 en route to the other countries. The Duke and Duchess are really looking forward to meeting so many of you on the ground and continuing to raise awareness of the high impact work local communities are doing across the Commonwealth and beyond. This will be their first official tour as a family!

"TRH The Duke and Duchess of Sussex are excited to announce that they have been asked to carry out a tour to Southern Africa this autumn,” the caption said on a pic of the royal couple.

The Duchess will only visit South Africa, while Prince Harry will venture to Malawi, Angola and Botswana.

While little Archie was not mentioned by name, the statement eluded to his presence on the itinerary by adding, "This will be their first official tour as a family!”

This will be Harry and Meghan's first international trip since their son’s birth on May 6. Since marrying in 2018, the pair have traveled together to locations such as Australia, New Zealand and Fiji.

It also won’t be their first excursion to Africa as they’ve visited Botswana together twice prior to tying the knot. Most recently, the pair celebrated Meghan’s 36th birthday by “camping out under the stars“ there in 2017, according to People.

Harry’s connection to Africa goes way back as he started his Sentebale charity in 2006 with Prince Seeiso of Lesotho to help people affected by HIV/AIDS in Lesotho, Botswana and Malawi.

The 34-year-old also does considerable work for animal conservation in both Botswana and Angola.