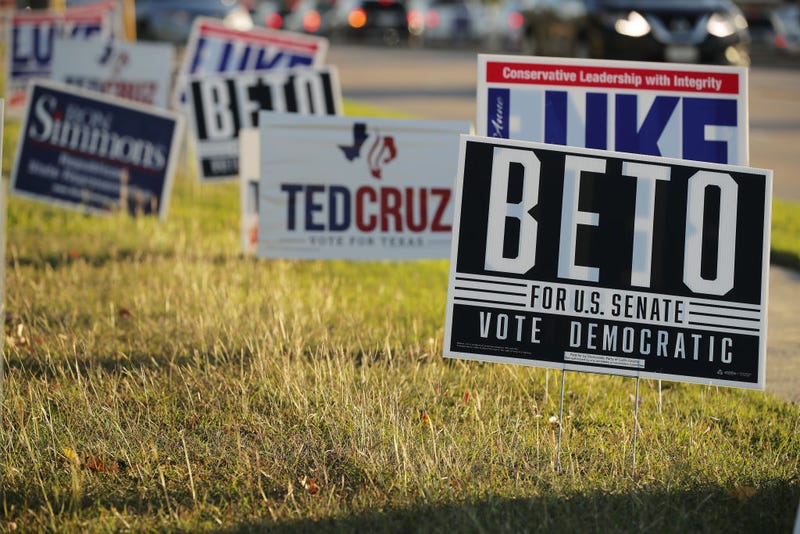 Thirty-five of 100 Senate seats are up for election on Nov. 6 -- 26 of which are currently held by Democrats.

The path to maintaining control in the Senate is therefore simple for Republicans: lose no more than one seat currently held by the GOP.

For Democrats to take control, meanwhile, it will be more difficult. First, the majority of the seats up for election are held by Democrats, meaning that there are more vulnerable Democrats overall than Republicans. But in order to gain a majority, Democrats need to win an additional two seats—without losing those they currently have. To make matters more difficult for the party, one Democratic seat is leaning Republican (North Dakota) and five others are rated as toss-ups.

Here are some of the biggest nail-biters.

In October of last year, Arizona Sen. Jeff Flake publicly announced he would not be seeking re-election, citing the “discord” and “dysfunction” of America’s democracy. With his seat open, Republican Rep. and former Air Force fighter pilot Martha McSally will face the relatively conservative Democrat Rep. Kyrsten Sinema. The race is expected to be a close one, with Cook Political Report and RealClear Politics both calling it a toss-up with days to go.

Arizona’s other Senate seat, which was held by John McCain until his death on Aug. 25, has been temporarily filled by former Republican Sen. Jon Kyl -- but thus far he has committed to serving only until the start of the next Congress in January, meaning one or both of Arizona’s Senate seats could go blue by 2020.

Bob Corker, Republican Senator from Tennessee, has also decided to retire, leaving his seat open too. Republican Marsha Blackburn will face former governor and Democrat Phil Bredesen. Blackburn served on Trump’s transition team and Tennessee hasn’t elected a Democrat since Al Gore, so while this race may be close, bets are on Blackburn.

Sen. Heidi Heitkamp of North Dakota and Sen. Joe Manchin of West Virginia are both Democrats whose votes on Supreme Court Justice Brett Kavanaugh’s nomination may well have had an impact on their chances at re-election. Heitkamp -- who ultimately opposed Kavanaugh -- is expected to lose against her Republican opponent, Kevin Cramer. Manchin, meanwhile -- who broke with his party and voted in favor of Kavanaugh -- is likely to be safe in his bid for re-election. He will face Republican Patrick Morrisey.

Texas Sen. Ted Cruz may have a formidable opponent in Democratic candidate Beto O’Rourke. O’Rourke, who is currently serving as a representative in Texas’ 16th district, has made waves this election cycle, not least for his astounding fundraising ability. Between January of last year and mid-October, O’Rourke has raised over $70 million to Cruz’s approximately $33 million. Despite this, the dream of a purple Texas may still evade the state, as most polls predict Cruz will maintain hold of his Senate seat.

Jon Tester, the incumbent in Montana, has served as a Senator since 2006. Although Tester is a fairly moderate Democrat based on national definitions, his race against Republican Matt Rosendale is currently rated as a toss-up, due in no small part to President Trump’s public dislike of Tester. Trump is currently planning a fourth visit to the state to stump for Rosendale. This race could go either way.

Nevada could also prove challenging for the incumbent. Republican Dean Heller was appointed to the Senate in 2011. Unfortunately for Heller, he is the only Senate Republican up for re-election in a state that Hillary Clinton won in 2016. This race is also rated a toss-up by RealClear Politics, Sabato’s Crystal Ball and Cook Political Report, meaning that Democratic candidate Rep. Jacky Rosen could stand a chance at pulling off an upset.

Sen. Bill Nelson, who’s running for re-election, is the only Democrat to hold statewide office in Florida. He will face current Florida Gov. Rick Scott. While Nelson and Scott are popular in their own rights, there is at least one thing that sets them apart: money. Scott has lots of it and is willing to spend it -- by a margin of 4-to-1 by one count. This is another race that most predict will be a toss-up.

In Indiana, Democratic incumbent Joe Donnelly is facing an uphill battle to re-election. Indiana is Vice President Mike Pence’s home state, a state Trump won by nearly 20 points, and a state where Republicans dominate statewide offices, leading many to call Donnelly’s 2012 victory “accidental.” Donnelly knows that the D next to his name could be held against him and has, therefore, made many overtures across the aisle. He will face Republican Mike Braun, who defeated two incumbent congressmen in the primary. All the major polls put this race as a toss-up, with the exception of FiveThirtyEight, which puts the odds slightly in Donnelly’s favor.

Missouri will be another close race for Democratic incumbent Sen. Claire McCaskill. Despite handily winning her re-election bid in 2012 against Todd Akin, McCaskill has a strong opponent in Josh Hawley, who is currently serving as the state’s attorney general. Trump won the state in 2016, and despite having low approval ratings now, McCaskill’s are even worse. Some polls put Hawley slightly ahead, but the general consensus is that this race will be a toss-up.

There’s one more race that has drawn attention in recent weeks: New Jersey. Democratic incumbent Sen. Bob Menendez has faced numerous scandals in the last few years and is up against wealthy Republican Bob Hugin, which has spurred Cook Political Report to move the race to a toss-up. Nevertheless, this is a state where a Republican hasn’t won a Senate seat in 46 years and where Clinton beat Trump by 14 points. Ultimately, while it might be a tough race for Menendez, most other polls predict he will win.