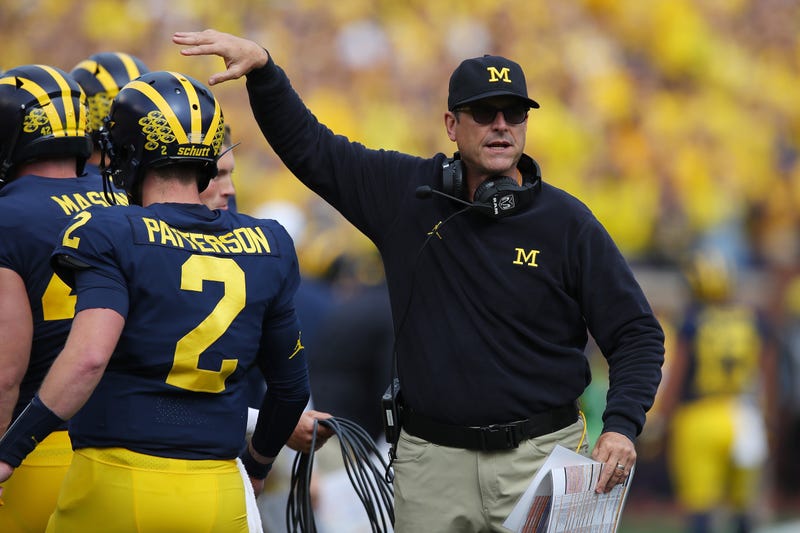 And he had a lot of feelings about Jim Harbaugh and the performance he got out of his Wolverines Saturday. Valenti regaled the audience with his many feelings during his show open on Monday.

The loss to Wisconsin proved once and for all that Harbaugh is an illusion, a "shell of a man" coaching a "shell of a team," as Valenti described it.

"Harbaugh is Michigan, Michigan is Harbaugh, together they're like the ultimate con ... Both the program and the coach."

For him, Harbaugh was disorganized, undisciplined, a man staring off into space with no idea what he was doing.

"You're a poser, you're a nothing," Valenti said, adding that Michigan is a regional program on the field with a national sales rack.

Michigan fans fancy themselves as "big boys," Valenti said, but Wisconsin took the football and rammed it "up your proverbial ass for 60 minutes."

"They pounded you without mercy," he added.

Michigan's problems ran deep, he said once he got going, and the media has been dishonest in their coverage of Harbaugh and the program. He's not a unicorn, he's a nothing.

"You know what your program is now? What the F is a Michigan man anyway? It's a creation, it's a myth ... You want to know who you can blame for all of this? Yourselves. You, as fans, you empower this man ... You love this. Well, good, now you're stuck with it."

Saturday was a disgrace and Harbaugh should lose his job this year.

"Jim Harbaugh should be gone," he said.

Here are some other key excerpts from Valenti's show open on Monday: