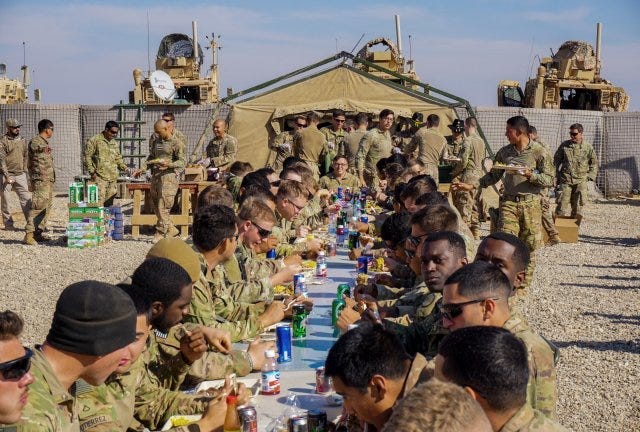 FORT MEADE, Md. -- Deployed Soldiers will get a taste of home this Thanksgiving after months of planning by logistics personnel to deliver tons of meat and fixings for the traditional meals.

"We will ensure that Soldiers in some of those remote areas of our theater have the same Thanksgiving meal that they would have whether they were sitting at home or out in the middle of the desert," she said.

ARCENT is preparing to feed about 50,000 troops, government civilians, contractors and coalition partners across 19 countries.

Preparations for the meals start as early as April, with many of the ingredients on hand at prime vendor locations by September, according to a Defense Logistics Agency news release.

Overseas locations start to receive high-volume items, like the turkeys and more than 131 tons of trimmings, in October.

"No matter where troops are stationed, they can expect DLA to provide the best possible meal for Thanksgiving," Col. Eric McCoy, DLA Troop Support Subsistence director, said in the release. "While it is not exactly the same as being home, it is our job to provide that taste of home to the troops."

Thanksgiving meals for all overseas troops will include:

Much of that food will head to the U.S. Central Command's area of operations, including Saudi Arabia where American troops recently deployed after Iran attacked oil facilities in September.

"When we first came up with our numbers, we didn't have those locations to support," Rutter said, "so we've had to kind of adjust some things to get support out to them."

The Army has also worked to cater to host nation concerns within the theater, which mainly consists of Islamic countries.

While some nations have allowed the importation of pork products, some do not. In that case, the menu may change a bit to offer alternative meat options, like turkey or beef bacon instead of pork.

The sheer amount of food items is also a challenge to deal with, while they're shipped to ports, go through customs and stored at warehouses until they can be delivered to troop locations.

"It's a huge enterprise," Rutter said.

The efforts are worthwhile once the hot meals finally make it onto Soldiers' plates.

"It's incredibly rewarding to know what we do here is going to matter to [those] who sit down on Thanksgiving and have the same meal and experience that we'd be able to offer them in the states," Rutter said.

After all, Thanksgiving is about tradition, especially those staple food items.

"You can talk to most any Soldier and they grew up having turkey, stuffing, mashed potatoes and cranberry jelly," she said, "and that's the same thing they're going to have in the middle of Iraq this year."