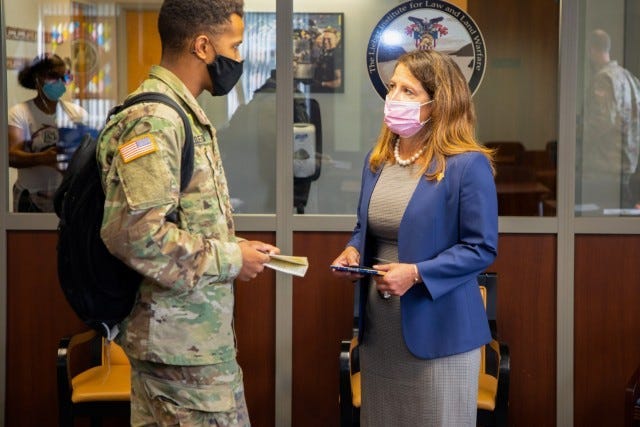 As the Army's principal deputy general counsel, Michele Pearce credits her career success to the many lessons she learned growing up as a military dependent.

Her father, a retired Navy chief petty officer, deployed to parts of Vietnam and Antarctica as a radioman, before ending his career as a nuclear ballistic submarine crewmember during the Cold War.

Her mother, a native of Puerto Rico, selflessly served as a dedicated military spouse. She helped raise her four kids while maintaining full-time employment as a hair stylist.

Pearce recalled her being a shining example of selflessness, often giving back to support her church and community.

"I was so fortunate to have a father and mother who believed in serving our country. The work ethic that I learned from my parents has always served me well," she said. "They always had bigger dreams for me than I had for myself.”

Inspired by the two leading role models in her life, Pearce discovered value behind a purpose-driven life, selfless service, and hard work, she said. These foundational values guided her as an Air Force officer, civil servant, mother, and wife.

Pearce was nominated to serve as the next Army general counsel. If confirmed by the Senate, she will be the first Hispanic-American woman to serve in the position.

Pearce looks to be a role model to others, much like her parents were to her.

"There are always challenges that exist" throughout the military, she said. "It is critically important that young women see other women in leadership roles. I want to make a difference for the Army and our nation, ensuring that the next generation of women looking up can see a chance for opportunity." 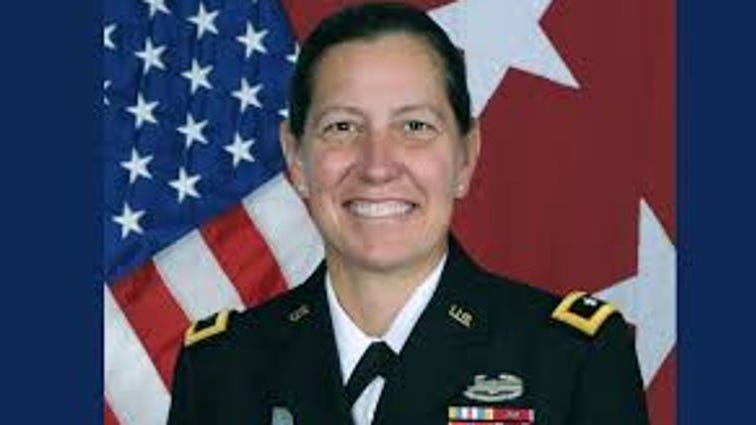 For the First Time in History, a Woman Will Lead the Army Reserve

Pearce loved to argue as the middle child in her family. It didn't take long for her father to notice her natural talent, she said.

"My dad always said I should become a lawyer because I liked to argue so much," she said. "That was the core reason why I became a lawyer. Up until that point, no one in my family had ever gone to graduate school."

Pearce also wanted to follow in her father's footsteps and serve in the armed forces. She offered to join the Navy, deeming it to be a promising career path. Her father disagreed, offering an alternative -- the Air Force.

Having spent years aboard a submarine, Pearce understood why her father pushed her toward a different service. He was determined to see his daughter's full potential and didn't think it was possible in the Navy during that era.

Pearce went on to attend and graduate from the University of Connecticut School of Law. She then commissioned into the Air Force in 1996 as a judge advocate.

"The world was open to me, and there were so many opportunities," she said. “I believe that military service is the absolute best place for any young person to start a career."

During her military career, Pearce deployed to Iraq in support of Operation Iraqi Freedom. She also held critical assignments as the aide to the Secretary of the Air Force, and as an assistant executive to the Air Force Judge Advocate General.

She learned to "never leave a job in the same state that you find it," she said. "Always find ways to improve -- not only yourself -- but your organization and the people around you. I am never satisfied with the status quo and will always give more of myself than I expect of others."

Pearce also met her husband, Steve, at her first duty assignment at Mountain Home Air Force Base, near Boise, Idaho. The couple went on to have a daughter, Cate, and son, Alex.

Steve, a former F-16 pilot, is now retired from service. Cate is a junior at the University of Virginia and is committed to helping out her community, while Alex is currently a freshman and ROTC cadet at the University of Colorado. He hopes to one day be an Air Force pilot like his father.

"My family is so wonderful, and they have been so supportive and loving," she said. "I am very fortunate."

Pearce proudly served 13 years before medically separating from the Air Force in 2009. After being diagnosed with lung and stomach cancer, she spent the last two years of her career undergoing chemotherapy and other treatments.

"It had always been my plan [to retire] from the Air Force, but the plan had to change," she said. "To be very frank, I was relieved that decision was made for me. My husband was a fighter pilot, and I was an attorney traveling all the time.

"I was literally exhausted and undergoing treatment," she added. "As sad as I was to walk away from a career, it was the best thing for me, my health and family."

After the Air Force, Pearce went on to be a readiness subcommittee staff lead with the House Armed Services Committee, and later became a Senate senior defense advisor.

She currently serves as the Army's No. 2 attorney, providing legal and policy advice to Army senior leaders.

Time spent on Capitol Hill taught her the ins and outs of working cooperatively with lawmakers to meet national security missions and requirements, she said.

"I spent my life trying to prove [my parents] right and trying to make them proud," she added.

Pearce recently spoke about losing her mother during a recent confirmation hearing.  Her mother died after a long and hard fought battle against Alzheimer's disease, she said. Eventually, she will be laid to rest next to her husband at Arlington National Cemetery, who passed away last year.

"The hard part was watching someone that was so intellectually gifted, articulate, and beautiful … diminish so quickly,” Pearce said. “Alzheimer's disease stole five years of meaningful hugs and kisses, and it is just so cruel. It is a horrible disease.”

If confirmed to be the Army's top lawyer, Pearce plans to prioritize initiatives that support the Army's modernization strategy and promote diversity in the legal corps.

Army leaders look to create new capabilities, such as artificial intelligence, robotics, hypersonic weapons, and electronic warfare technology, among many others.

"When you talk about new capabilities, you have to get it right," she said. "You need to have the right legal, ethics, and policy reviews. The process can be complicated when there are many unknown variables."

"At what point in the kill chain do you require a human? Or is [the Army] confident that the machine will make the right choice," Pearce said, as she discussed the types of questions Army lawyers must answer. "We are talking about weapons that are employed on the battlefield in ways never seen before."

The general counsel's office responds to the needs of the warfighter and is accountable for upholding the laws and regulations that govern the Army's mission.

Beyond modernization, Pearce is determined to shape the legal corps' future by implementing an extension of the Army's People Strategy to support the force.

"The general counsel corps needs diversity -- not just color and gender -- but diversity and experience,” Pearce said. "I am looking to grow with new … and passionate attorneys, and introduce them to what it means to serve."

Through the Office of the General Counsel’s people strategy, Pearce plans to refine its hiring board process. Further, she intends to increase recruiting efforts at historically black colleges and universities to generate interest in civil service.

Building a diverse Army requires leaders to listen to the larger force, she added. For the past few months, Pearce has participated in the "Your Voice Matters" listening sessions, which are part of the Army's diversity initiative called Project Inclusion.

"I would argue that my people strategy is part of the larger Project Inclusion strategy,” she said, adding she is also implementing a professional development program to expose attorneys to new opportunities they might not have had otherwise.

Each listening session has three components, she said. Leaders want to know about an individual's experiences, followed by lessons learned. Lastly, senior leaders want people to share ideas on how to help make the force better for everyone.

"It is a great way to get unfiltered ideas from the boots on the ground. People who are seeing problems on a day-to-day basis," Pearce said.

Project Inclusion is not the Army's way of “checking a box” to say they did something to support, she added. Each listening session will inform real change and fuel the Army's People Strategy.

"The Army's senior leaders are dedicated to [the cause], and they're going to see it through," she said. "We are all so fortunate to serve our country at this time, and it is such a privilege to be part of the Army team.”