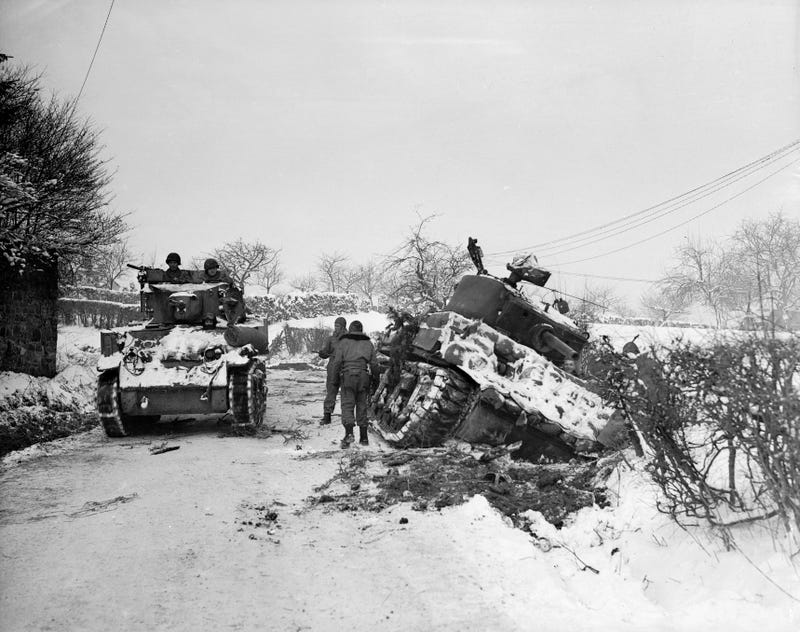 With the allies closing in on Nazi Germany in 1944, Hitler ordered a counter-offensive so bold and so seemingly reckless that it shocked many in his own staff. Called Operation Wacht am Rhein (Watch on the Rhine) Hitler's plan was to attempt a breakout from the steadily advancing allied forces pushing towards Berlin on both the Eastern and Western fronts by punching into the Ardennes forest and advancing all the way to Antwerp. While the surprise counter-attack was unexpected by Hitler's military officers, invading Belgium was something of a German tradition by this point.

"Early on the misty winter morning of Dec. 16, 1944, more than 200,000 German troops and nearly 1,000 tanks launched Adolf Hitler's last bid to reverse the ebb in his fortunes that had begun when Allied troops landed in France on D-Day," an official Army history begins. The Nazis launched their offensive in mid-December, one of the coldest on record. American troops had to contend with not just snow and ice, but also the freezing temperatures, many becoming cold-weather casualties during the battle. On the first day, the Wehrmacht managed to break through the American frontlines creating a bulge on the military planning maps, which is where the Battle of the Bulge gets its name.

Nestled within Operation Wacht am Rhine was a second smaller mission dubbed Operation Greif, named after the German word for the mythical Phoenix that rose from the ashes. Hitler's phoenix chosen to run Operation Greif would be his favorite commando: Otto Skorzeny.

Born in Vienna, Austria Skorzeny was an imposing figure with scars on his cheeks from fencing accidents. After fighting the Soviets on the Eastern front, Skorzeny's bold actions came to the attention of high ranking Nazis who selected him for a mission to rescue Benito Mussolini from a hotel turned mountain redoubt in Northern Italy. Skorzeny assembled and trained a special team for the mission and conducted a dangerous infiltration utilizing gliders. The Nazi commandos secured Mussolini and returned to Germany without firing a shot. In October of 1944, Skorzeny ran another successful operation, this time kidnapping the son of the Hungarian regent which helped end Germany's political stalemate with the USSR, keeping Hungary in Nazi hands.

Fresh off of that mission, Hitler called for Skorzeny to be ushered into a private meeting where he was briefed on Operation Grief. Hitler wanted his favorite commando to launch a massive deception operation when the counter-offensive began, infiltrating behind allied lines wearing captured American uniforms and weapons. Once behind enemy lines, they would blow up Allied fuel and ammo depots, reverse road signs, conduct recon, and sow confusion amongst the allied ranks. He had little more than a month to prepare for the mission, but as Skorzeny recalled in his memoirs Hitler told him, "I know that the time given you is very short, but I can count on you to do the impossible."

A request was put out for English speaking soldiers in the Wehrmacht, of which Skorzeny determined that only ten of them had the familiarity with American accented English and culture to be able to pass as US soldiers. He had somewhere between 100-150 other English speakers assigned to his unit and some of them were sent to rub shoulders with American and British POWs in prison camps in order to improve their accent and familiarize themselves with American slang. The captured Allied equipment was also not encouraging. There were not enough US-made rifles to go around and only one working Sherman tank. In order to compensate, they repainted German tanks and hoped no one would look at them too close.

On December 16th, the German offensive began with an artillery bombardment of American frontlines followed by a ground assault led by the 1st Panzer Division. Skorzeny divided his men up into four commando teams and followed behind the conventional troops before infiltrating American lines, something which proved easy enough to accomplish in the end. The American forces were exhausted from Gen. Patton's relentless push into France which had stretched their logistics lines to the breaking point and now they were also freezing cold.  Mingling with American troops, the Nazi infiltrators began conducting their recon, taking notes of important road junctions and bridges. When the opportunity arose, they also intentionally pointed advancing American fighting columns in the wrong direction. According to some reports, US forces were lost for up to three days at a time in the Ardennes because of this simple deception.

A week into the battle, the Americans became aware that Germans had infiltrated their lines and were spreading disinformation and sent out a warning. Of course, some of Skorzeny's commandos were inevitably captured. Minor discrepancies and nuances managed to compromise the German infiltrators. In one case a disguised German asked for "petrol" instead of "gas." In another case, a German told an American on his way to the latrine to "keep his pecker up." In another amusing incident, one of the infiltrators was in a chow hall and told the American troops "up your bottom" rather than using the expression "bottoms up." These gaffes created confusion on the part of the Americans, which then turned into questioning, which then quickly led to the unraveling of the deception and ultimate capture of the German commandos.

However, whatever damage the German infiltrators did to the Allied war effort was rather minimal compared to the panic and paranoia that set in amongst the US Army as rumors about disguised Germans in their ranks spread like wildfire. In response, security had to be upgraded around bridges, headquarters, and other strategic locations. Checkpoints were set up all over the battlefield where credentials and identification were demanded. Soldiers took to questioning one another with bits of arcane American trivia in attempts to reveal disguised Germans.

Gen. Omar Bradley told the Washington Post that he was questioned by fellow Americans a number of times in order to prove his identity saying, "the first time by identifying Springfield as the capital of Illinois; the second by locating the guard between the center and the tackle on a line of scrimmage; the third time by naming the then-current spouse of a blonde named Betty Grable." Supreme Allied Commander Gen. Eisenhower was essentially placed on house arrest for his own safety as one of the rumors swirling about Skorzeny's commandos was that they were assigned the mission of assassinating him, which actually wasn't true and Skorzeny knew full well that this was beyond their capabilities. After three days, Eisenhower grew weary and blew off the security arrangements to join his men during the critical battle.

British Field Marshal Bernard Montgomery was reported to have an even more distressing experience as American troops became so suspicious that they shot out the tires on his car and captured him after he ordered his driver to blow through their checkpoint. He was held under duress for several hours until a British captain known to the Americans vouched for his bona fides.

Meanwhile, real acts of heroism took place on the battlefield as the US Army fought back and held the line against advancing Nazis at all costs. Field Marshall Gerd von Rundstedt wanted to withdraw his exhausted and depleted Nazi forces back to German lines but Hitler refused to allow it. Meanwhile, Eisenhower had Patton strike back, hitting hard on Rundstedt's southern flank. The 101st Airborne Division mounted a defense in the town of Bastogne and refused to surrender, despite being completely surrounded by the Nazis. Outnumbered and outgunned, the stubborn para-troopers proved a major thorn in the side of the Nazis and prevented them from advancing further. They held out until Patton's Third Army was able to come to the rescue and break the encirclement.

For his part, Skorzeny ignored his Führer's orders to remain behind German lines and led a foolhardy advance with the remainder of his force which received a stark rebuke from its first encounter with American forces. Skorzeny and the survivors quickly fled back to Germany in defeat, but the chaos his commandos had sown continued to have an outsized impact on the Americans by continuing to spread distrust in the ranks. Eisenhower had wanted posters printed and distributed with Skorzeny's picture on them.

Despite all this, America had turned the tide in a stunning reversal at the Battle of the Bulge, breaking the back of the Nazi war machine. 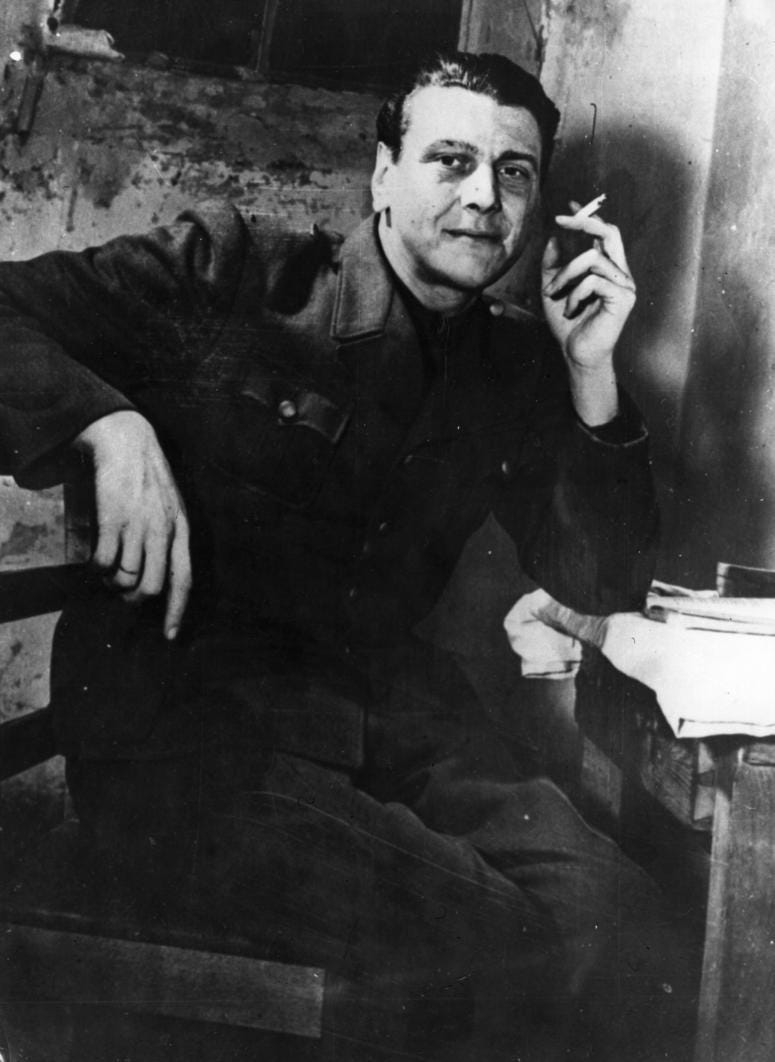