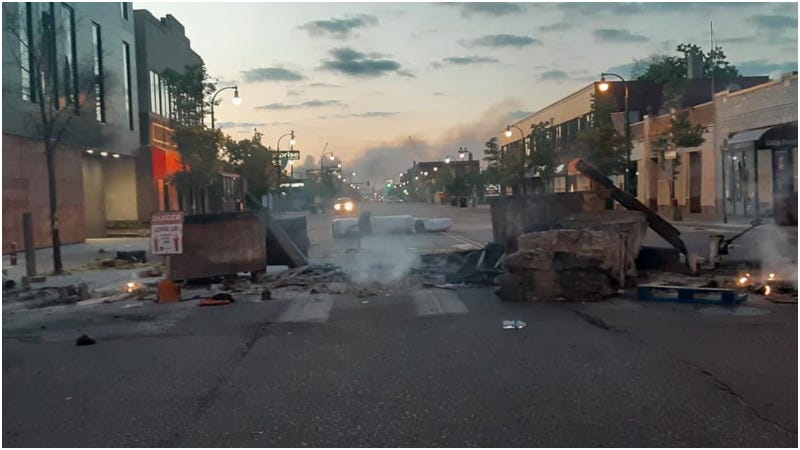 After another night of devastation and destruction in Minneapolis, residents are on the streets to start the fifth day of protests to try to help clean up their city.

THIS. THIS. THIS.
This is the Minneapolis I want people to see.

...Neighbors cleaning up the Walgreens on 32nd & E Lake that was burned by agitators over night.
Emotions are high here. Some crying as they clean up.
These are the helpers.
These are Minnesotans.#wcco pic.twitter.com/jclyt1w4rp

Protests took to the streets of south Minneapolis for the fourth night of both peaceful and violent protests. Targets of the violent protesters were near the Minneapolis Police fifth precinct where they set fire to a Wells Fargo bank, a staffing agency and the vacant K-Mart building.

Saturday morning brought out dozens of volunteers to help clean the streets after looting hit the area hard the night before. Sweeping up debris, moving large pieces of bricks and removing graffiti happened all over the area by residents of the neighborhood and people coming in to help.

Minneapolis right now: neighbors from different backgrounds filling Lake St in mass clean up. Hold this image in your head—w/the image of a knee on a neck—to show what we can do and what we urgently need to fix. Don’t let destruction by vandals from elsewhere distract pic.twitter.com/w43IsfJyDr

An ARMY of volunteers in Minneapolis helping neighbors clean up business damage. “Bring a broom” they were told. What a sight. pic.twitter.com/OjzXpEXCLk

Amidst the rubble. People cleaning the rubble. @wccoradio #CALM pic.twitter.com/HnXPtRTcLD

locals out helping to clean up the corner of lake and lyndale after a long night of unrest. pic.twitter.com/QDj5QLGgup

Govenrment officals are expecting for a fifth night of looting. Minneapolis, St. Paul and other suburbs have issued curfews to help seperate Minnesota residents and peaceful protesters from the violent protesters.