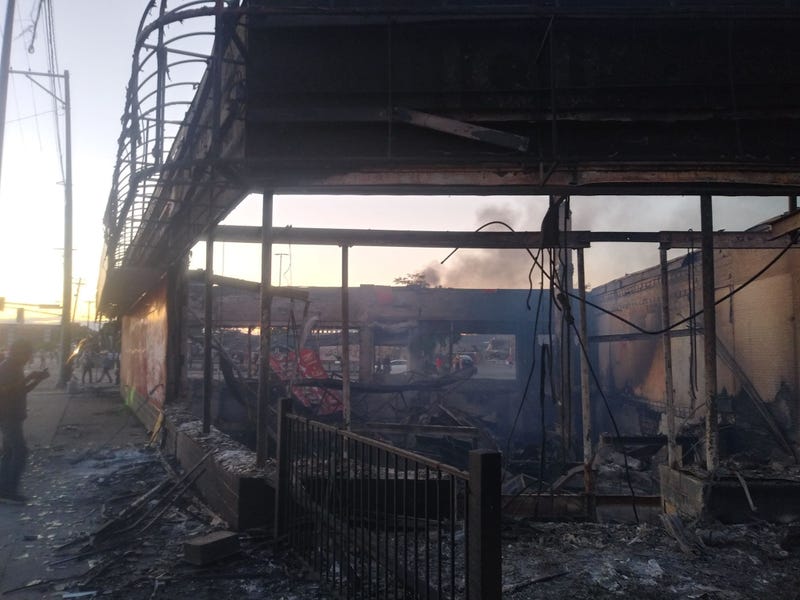 MINNEAPOLIS (WBBM NEWSRADIO) -- The Minnesota National Guard has been deployed in Minneapolis to stand against the looting, rioting and property damages that have ravaged the city since protests erupted and became violent in the aftermath of George Floyd's killing.

Businesses, gas stations and police cars have burned to the ground as the city has seen extensive damage. In the Phillips West neighborhood, business owner Nieves Arietta sits outside her produce store to deter those who might seek to destroy it.

Arietta, who owns New York Plaza, boarded up the windows but is still worried about what could happen to her business. But, she's trying to remain hopeful that the protests will stop damaging the city.

"I hope everybody is in peace and (that the protest) will be done soon," Arietta said. "And I say God bless America."

The woman has been planted at her storefront day and night alongside two young men who are carrying large sticks. Both sides of her store are surrounded by burned down structures and looters.

One of the men is a uniformed security officer but he said he learned his lesson from the first night of the riots. Now, he wears plain clothes instead of his uniform.

Photo credit An unattended police vehicle is set on fire in Minneapolis near a gas station Friday night. (Brandon Ison/WBBM)

'These people are here looting and protesting — they are not protesting," said a business owner who did not want to be named. "They are just wreaking havoc in my neighborhood. We got people that are ready to come out and start shooting."

Minneapolis officials claim 80 percent of protesters inciting and participating attacks are coming from outside the state and say it will be clear to them who they are if they take to the streets after the 8 p.m. curfew put in place to curb the violence. Minneapolis Mayor Jacob Frey and St. Paul Mayor Melvin Carter implemented curfews until Sunday morning and Governor Tim Walz signed an executive order shortly thereafter.

“It’s time to rebuild our community, and that starts with safety in our streets,” Walz said in a news release.

The National Guard and police officers are prepared to take necessary action to quell the riots, said Police Chief Medaria Arradondo at a press conference.

“We are not going to let a group of people hijack this city,” Police Chief Arradondo said. “So today, I just wanted to let the citizens of Minneapolis know that hope is here. We are seeing it in so many ways.”

While he said the police are overwhelmed, he sees hope on the horizon and his department has been working with community organizers protesting but who aren't behind the violence.