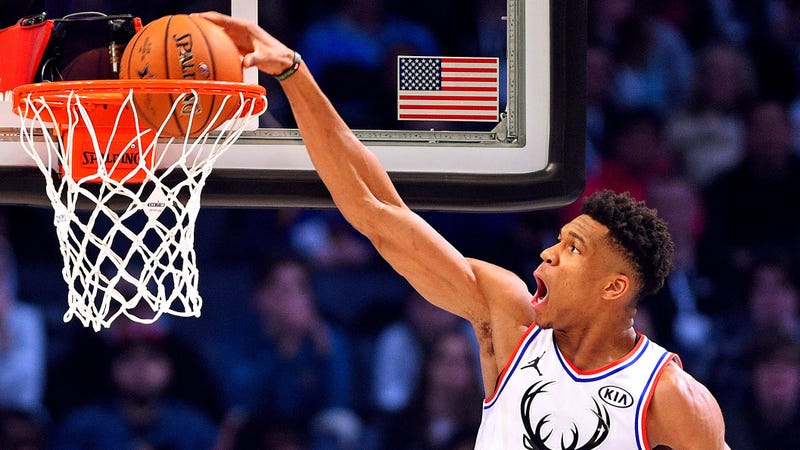 But those were footnotes.

All basketball fans will remember from the defense-optional exhibition is the highlights: jaw-dropping dunks, poetry-inspiring passes and sentimental sendoffs.

Such is Curry's flair for indelible moments, he didn't even need to fling in one of his trademark 3-pointers to provide the uber-highlight of the night. There are a handful of Earthlings who could reach this pass, and Giannis is one of them. The Greek Freak had a game-high 38 points.

For old times' sake. The best friends and former teammates -- shades of their Miami Heat days on this one -- made sure to connect in Wade's valedictory final All-Star appearance.

A relatively routine dunk by All-Star standards that was rich in subtext. The two former superstar teammates, who had been at odds following Irving's abrupt exit from the Cleveland Cavaliers, appear to be reconciling -- just in time for Irving's free agency this summer.

Nowitzki, a special addition to the roster in his likely final NBA season, entered the game late in the first quarter and buried three consecutive 3-pointers. Nowitzki joked as he came out of the game: "That's what I do, baby!"

Curry's reverse dunk at the buzzer

Curry, who grew up in Charlotte and served as the unofficial host of All-Star weekend, closed the game with a surprising reverse dunk (did we know he could get up like that?) off a bounce pass to himself.

Steph went with the reverse off the bounce to finish the #NBAAllStar game! pic.twitter.com/1tR0zdQI8e