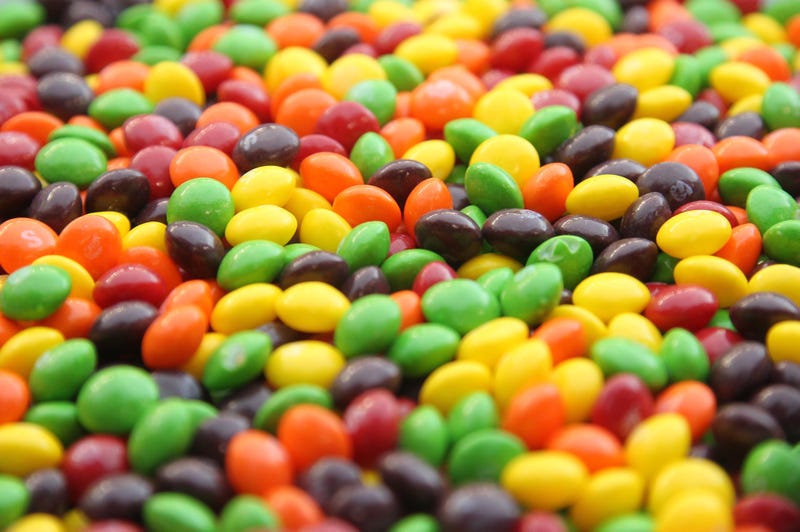 Tasting the rainbow is going to get a bit more confusing this summer. Skittles announced that it would be releasing three new flavors for the season, headlined by bags called Imposter Skittles. As the name suggests, the appearance and flavor of these new Skittles don’t match up. How can it taste like orange if it looks green?? Well Skittles has mastered the technology folks. The bags, which will be available exclusively at Walmart, will feature Alter Ego Orange, Cryptic Citrus, Sneaky Strawberry, Undercover Apple, and Raspberry Ruse as flavors.

That’s not the only new bag the candy giant is bringing to you.

The nostalgic among you will be excited Skittles Freeze Pop. Designed to mimic the flavors of the freeze pops in plastic sleeves you ate as a kid, it’s not entirely clear how the blue raspberry, lemon, grape, orange and strawberry flavors will be so very different from some of the ones in a normal bag of Skittles, but at least you won’t spill sticky blue juice all over your t-shirt while you eat them. Freeze Pop Skittles will be available only at Dollar General.

Finally, one more Dollar General exclusive for the summer—Skittles Sour Wild Berry. A puckering version of the Wild Berry Skittles that have been out for a while now.

Seems like a lot of candy classics are getting reworked recently. Kit Kat came out with its mint chocolate bars—the first new flavor in a decade. And Hershey redesigned its chocolate bar for the first time in its 125-year history.

These Skittles aren’t here to stay though. If you won’t want to get in on any of the new flavors, you’ll have to jump on them soon because they’ll only be available for a limited time this summer.