For the first time, Joe Judge is attending the NFL combine in Indianapolis as the head coach of the New York Giants. He and general manager Dave Gettleman spoke to reporters Tuesday about what the future might hold for Big Blue. Here were the four biggest takeaways.

Gettleman made that declaration, saying he's open to trading down from the fourth overall pick in April's draft. It's a much different tone than two years ago when the Giants general manager never seriously entertained offers at No. 2 overall because he was so smitten with running back Saquon Barkley.

"Whatever we do is going to be in our best interest," Gettleman said Tuesday.

Gettleman added that he hopes to plug enough holes in free agency so that he can draft the best player available. 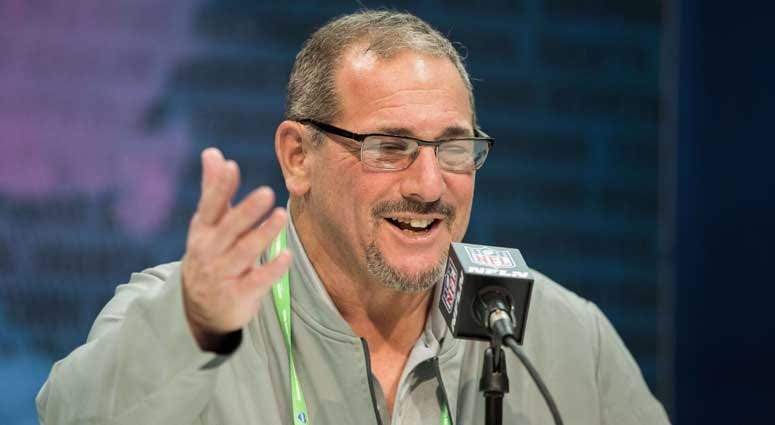 But of course, just because Gettleman is considering trading down doesn't mean he will.

"We're at four. Let's say we trade back to eight (and) there's only four players that we like," the Giants' GM said. "What if they're all gone? Now what are you going to do? You going to trade back again? You can trade yourself back out of good players."

Added Judge: "We'll listen to everybody. (If) someone comes at us with an offer that we think is going to benefit the Giants, we'll entertain that offer. We don't have to do anything, don't have to make any decisions 'cause we're listening to somebody."

Just like he did in his introductory news conference, Judge did not pay quarterback Daniel Jones any compliments and did not commit to him being the franchise quarterback. He didn't even say his name.

Judge explained that he doesn't think it would be fair for him to set any expectations for any player on the roster at this point -- not just Jones. The rookie head coach added that he has no depth chart at this point and that "every one of our players is going to come in here with a blank slate and be able to compete from the ground up from Day 1."

Judge was asked if he was concerned that, by not publicly supporting Jones, he'll fuel speculation about the second-year QB's future in New York.

"I understand and respect the outside perspective," he said. "What's important to me is the guys inside that building understand why I'm doing things and that I have their best interest at heart. And over time they'll understand that."

Like Gettleman, Judge said he's not targeting a particular position in the first round.

"It's really, let's look at everything as a whole," he said. "There's a lot of good players in this draft. There's players that are available in free agency. We're going to see how they all fit within cap space, within draft picks, and add the best we can.

"The biggest thing you look for on the field is smart players who can execute the assignment, who can play situationally where tough guys -- physically and mentally tough -- can do what's right for the team, not always what's right for them. And can they play through some discomfort? And you want guys that play fundamentally sound."

Gettleman declined to discuss any contract negotiations but said he is considering placing the franchise or transition tag on defensive lineman Leonard Williams.

The Giants made the unconventional move of acquiring Williams from the Jets before last season's trade deadline. The move was made despite the fact that Big Blue was not in serious playoff contention and Williams was an impending free agent.

The Giants' general manager said he's aware of the criticism he'll face if Williams is not re-signed.