ANAHEIM (KMOX/AP) - St. Louis Blues defenseman Jay Bouwmeester collapsed on the bench and Tuesday's game against the Anaheim Ducks has been postponed.

"With 7:50 remaining in the first period of our game tonight, Jay Bouwmeester suffered a cardiac episode and collapsed on our bench after completing his shift. Thankfully, with the quick response of our medical trainers, Anaheim medical trainers and their team physicians, they were able to stabilize Jay. He was alert and moving all of his extremities as he was transported to UC Irvine Medical Center. Currently, Jay is conscious and alert as he undergoes further testing by Anaheim's physicians. We will update Jay's condition on Wednesday morning."

Fox Sports Midwest color commentator Darren Pang stated during the broadcast that Bouwmeester appeared to be alert and awake as he was being transported out of the arena to a local hospital.

Jay Bouwmeester just collapsed it looked like on the Blues bench and got taken to the locker room. Scary situation right now. pic.twitter.com/jpXY6XMP1e

The Blues confirm the game has been postponed and will be made up at a later date.

There's has been no official word on Bouwmeester's health.

Due to the medical emergency involving Blues defenseman Jay Bouwmeester, tonight’s game has been postponed and will be made up at a later date. #stlblues 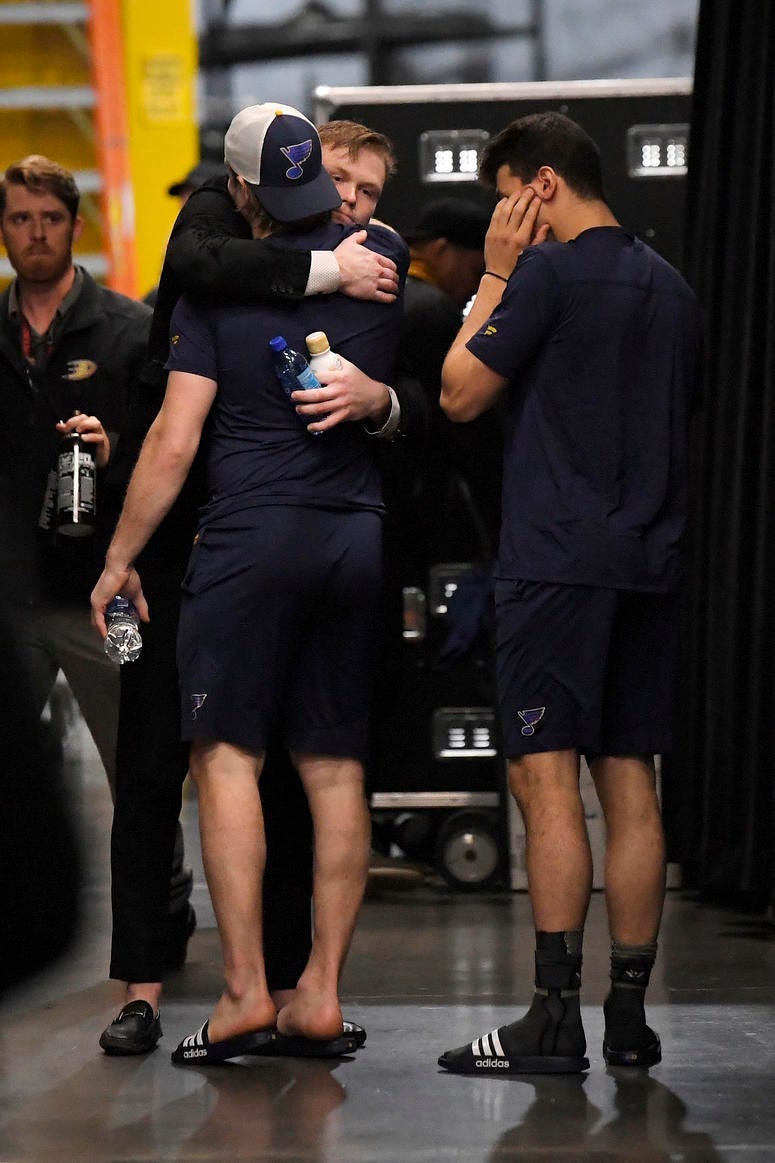 Both teams then went back to their locker rooms. Anaheim Ducks left wing Max Jones was photographed embracing two members of the Blues after the game was postponed for the medical emergency.

The Ducks first tweeted that the game is being delayed due to a "medical emergency."

There was a medical emergency near the Blues bench. A Blues player was taken into the dressing room, and the game is currently delayed.

Bouwmeester, 36, is in his eighth season with St. Louis and 17th overall in the NHL. He won his first career Stanley Cup with the Blues last year.

Messages are flooding in from around the NHL in hope of good news about the veteran.

We join the hockey community in sending our thoughts and well wishes to Jay Bouwmeester, his family and the Blues💙 https://t.co/cbV1xaTPXt

Sending our thoughts to Jay Bouwmeester and the @StLouisBlues 💙 https://t.co/ALejQiI2Pp

This is a breaking news story that will be updated.