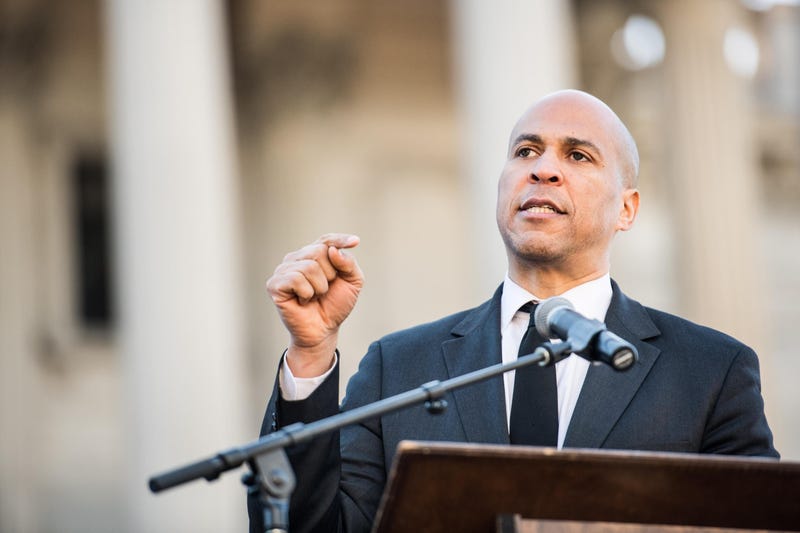 Tuesday is Primary Election Day in New Jersey, and U.S. Sen. Cory Booker called in Monday morning talk with KYW Newsradio's Brandon Brooks about some of the issues on the minds of many voters.

A lightly edited transcript of the conversation follows.

Two of big items on the agenda for Congress are police reform and another round of financial stimulus. What do you think Congress can actually agree on about policing?

Well, I was excited to see the bill I helped author pass out of the House of Representatives with some Republican support. And the bill is widely supported by Republican and Democrat electorate, the majority of whom support banning choke holds, stopping "no-knock" warrants, things that would save lives.

And I hope we can get something like that done in the Senate, while what Republicans in the Senate are proposing is things that actually wouldn't ban these practices and wouldn't save the lives in the way that activists and Americans have been demanding.

So I'm hard at work. We got a major criminal justice reform bill done and I'll continue to negotiate to see if we can actually pass a bill that has real substance to it and can really answer the calls and the cries from Americans, frankly, from both parties, who want to see reform.

So your bill addresses qualified immunity. It's something that protects officers from civil lawsuits in some cases. Now some Republicans have said, "No, that's off the table." Do you see any room for a meeting of the minds there?

The challenge I have right now is (Sen.) Mitch McConnell (of Kentucky), who calls himself "Grim Reaper" because he says he kills so many of the bills. The bipartisan bill coming from the House of Representatives.

This is not a time for reflexive partisanship for ending progress. This is the time to find that common ground that can actually save lives and create better police accountability, which is something that all Americans want: more transparency into what's happening with our American policing; more accountability when officers do serious wrong they should not be above the law. They should be able to be held accountable in federal courts.

Right, but remember: The head of the Federal Reserve is even calling that we are in the depths of a recession that could be prolonged, especially if we don't get the health care part right, which we are seeing in the South and the West with trends moving in the wrong direction.

This is the time to protect our economy and to invest, because a lot of Americans are hurting. And that means expanding unemployment insurance beyond the cutoff we're about to see at the end of this month. That means actually helping our small businesses, many of whom we see have taken a step forward and calling for opening, or having that suspended like we're seeing in so many states.

And we've got to help our small businesses endure. That means making sure that back on the table is a stimulus check for working Americans that helps so much. 87% of New Jersey families got those stimulus checks that we're seeing actually do stimulate the economy, as well as helping families during this difficult time to make ends meet.

And so this is a time for the government to act. We're seeing it called for by economists — both conservative and progressives — as well as leaders. And the biggest thing is that I'm fighting for, the No. 1 priority, is aid to states and local government. Because right now all across New Jersey we're facing massive layoffs of teachers and firefighters and first responders. If we don't get the federal government to act, this is something that's being called for by the National Governors Association — Republican, Democratic governors — the National League of Municipalities — Democratic and Republican mayors and city council people. We know that if we can help the airline industry prevent layoffs we should be doing that for state and local governments as well.

In those stimulus checks you talk about, Senator, what kind of number would you like to see on them?

Again, a compromised position is just to go back to do what we did before. I led the effort in the original COVID package to get stimulus checks, and those were $1,200 per family. A family of four could see themselves with about $4,000 to help them through.

And what we saw with that money is that people who received it actually spent that money. In other words, they put it into the economy. That helps create ripple effects through.

We know, again, from the Fed chair and other economists, that this is a time we need to get spending out there — but unfortunately with a lot of parts of our economy still shut down, from sporting events to restaurants.

Unless we see people having the resources to get out there and spend, we are going to see ourselves continue to slide into a recession that could do permanent damage to our economy well into 2021. We need to avoid that now. And stimulus checks are one good measure we can do.