The Knicks entered the 2019 offseason hoping that they could strike it big by signing an elite free agent.

That didn’t happen, as the team instead had to settle for middle-of-the-road guys like Julius Randle and Marcus Morris. Kevin Durant and Kyrie Irving had been tabbed as a possible tag-team in Manhattan, but they ended up taking their talents to Brooklyn. Kawhi Leonard didn't come either.

None of the superstars who were available wanted to join the Knicks, and former New York big man Enes Kanter thinks he might know the reason why: ownership. Kanter went on “The Full 48” podcast with Bleacher Report’s Howard Beck recently and claimed that he has heard other NBA players express concern about playing for the Knicks because of James Dolan.

“Not many people know that, but players talk. From different teams, they talk,” Kanter said on the podcast. “I’m not blaming anybody. I had an amazing time with the Knicks. But other teammates I talked to or if they’re on different teams, they always said, ‘Amazing city, MSG is amazing. Everything is so good. But the ownership.’ They always keep saying, ‘But the ownership.’”

Dolan essentially took over day-to-day ownership for the franchise in 2000. The Knicks had made the NBA Finals in 1999, but they haven’t been back since. Under Dolan’s care, the team has only made the playoffs five times in 19 seasons. Out of those five trips to the postseason, New York has only won one playoff series. 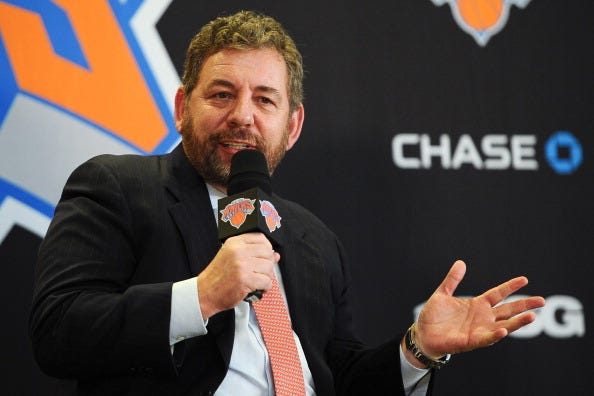 In 2019, David Fizdale’s team finished with the worst record in the NBA, but they couldn't get lucky and win the draft lottery for Zion Williamson.

Kanter spent one and a half seasons playing for the Knicks. He was waived in February of 2019 after taking issue with being demoted from a starter to a bench player. The Turkish center spent the second half of last year in Portland before signing with the Boston Celtics this summer.

Despite the little bit of drama at the end of his spell in New York, Kanter insists that he always recommends the Knicks when talking with other NBA players.

“I always tell them the Knicks are amazing. It’s the Garden, it’s the Mecca. If you win in New York, you’re the king of the world. Some of the players are I guess scared to come here and don’t even want to deal with that.”

Dolan has a tendency to make headlines through some questionable displays of anger at Madison Square Garden. In February of 2017, Dolan infamously had fan-favorite Charles Oakley ejected from the same arena he used to play in. Last season, he banned a fan from MSG after the fan yelled “sell the team” at Dolan as the owner walked off the court.

Kanter and the Celtics come to the Garden for the first time on October 26.