For the second time in three years, the Giants are in the market for a head coach after firing Pat Shurmur on Monday, according to multiple reports.

Shurmur lasted just two seasons in New York, going 9-23 — coincidentally the same record he had in his previous head coaching gig with the Cleveland Browns from 2011-12.

The Giants concluded a 4-12 season Sunday by losing to the Philadelphia Eagles at home 34-17. The year included a franchise-record-tying nine-game losing streak.

After parting ways with Pro Bowlers Odell Beckham Jr., Olivier Vernon and Landon Collins in the offseason, the Giants were unquestionably short on talent, but Shurmur did little to suggest that was their only problem. 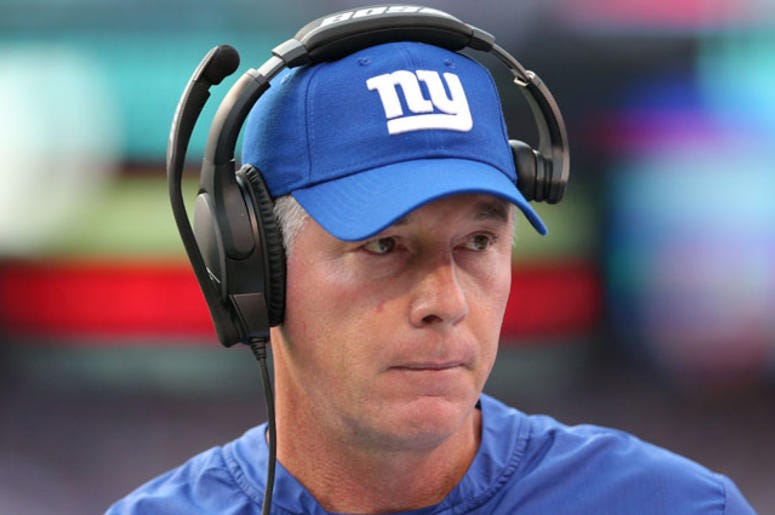 He earned the Giants job in large part due to his success as the offensive coordinator of the Minnesota Vikings, but in New York his play-calling left many observers scratching their heads. For example, trailing the Patriots 28-14 in Week 6, he punted with seven minutes left in the game, erasing pretty much any hope of a comeback. A week later, trailing by three points with 4:23 to play and the ball at the Giants’ own 25-yard line, Shurmur went for it on a 4th-and-15 — a low-percentage play in wet conditions that essentially sealed their losing fate. And in Week 8 at Detroit, Shurmur unsuccessfully went for a two-point conversion with 20 minutes left against the Lions — far too early for such a big gamble in many fans’ eyes.

Shurmur tried his best to put a positive spin on the team’s performance during a rebuilding season that saw Daniel Jones take the starting quarterback reins from Eli Manning. In November, the coach told reporters, he was seeing improvement “behind the scenes,” but that comment was largely mocked by fans and media. And on Sunday night, Shurmur said he believes the Giants are better off now than when he took over.

“We’re building a team," he said. "A lot of dead money this year, a lot of cap space next year and some prime picks where we can use the draft wisely and make decisions on making this team better with impact players.

"If I’m back, I’m looking forward to coaching this young talent. If I’m not, whoever coaches this team has got a great group of young players."

But if the Giants do turn a corner next year, Shurmur won’t be on the sidelines to see it.

There are a number of directions the Giants could go in their search for Shurmur’s replacement. They could hire an experienced head coach with a track record of success, such as Mike McCarthy, formerly of the Packers. They could look to hire a coordinator from another team again — New England offensive coordinator Josh McDaniels’ name often comes up for openings, and he inteviewed for the job two years ago. Or they could pluck an up-and-comer from the college ranks, such as Oklahoma’s Lincoln Riley or Baylor’s Matt Rhule, a former Giants assistant under Tom Coughlin.

Big Blue has reached the playoffs just once since its Super Bowl championship following the 2011 season and has lost double-digit games in five of the past six years.