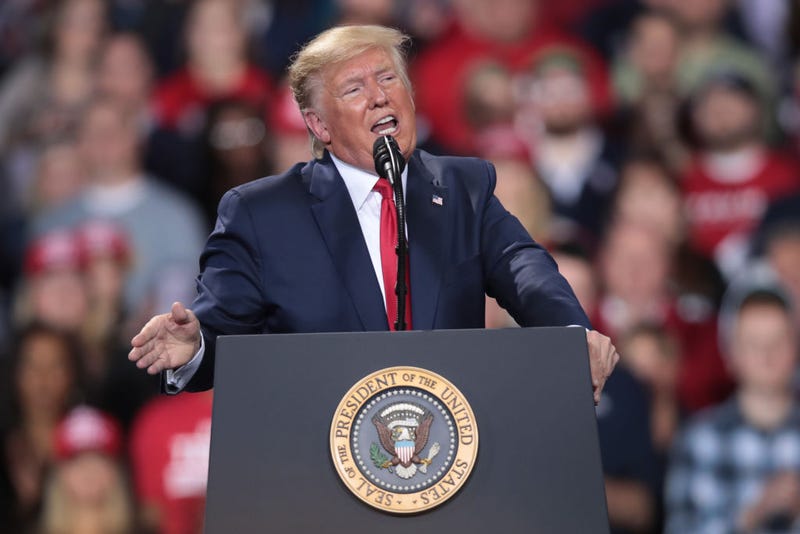 NEW YORK (WCBS 880) — Two articles of impeachment charging President Donald Trump with abuse of power and obstruction of Congress were approved in the House on Wednesday night.

While this is the third time in history that a U.S. president has been impeached by the House of Representatives, it's the first time an impeached president has faced reelection, meaning the 2020 race is in uncharted waters.

Assuming President Trump is not removed from office by the Republican-controlled Senate, noted political scientist Dr. Larry Sabato does not believe the impeachment will affect his chances for reelection.

"My question is simply will people remember this to the point of having strong emotions about it by November? My tentative answer is no, and the reason is because even in a normal presidency — and this is no normal presidency — there are so many controversies in a given week that by the time you have two or three months pass you can barely remember the details of what happened, much less feel strongly about it," Sabato told WCBS 880's Steve Scott. "And this being an abnormal presidency, you have even more controversies than usual."

It's possible this could prove more harmful to Democrats.

"I just don't think it will make that much difference for him, it may make some difference for a handful of Democrats who are representing districts that Trump carried in 2016 and if Trump wins a second term he's almost certain to carry those districts again, maybe by more," Sabato said.

With unemployment at record lows, stocks at record highs and 401k's soaring, Sabato said the state of the economy will be Trump's best chance at a second term.

"We're a year away, but what I've seen recently suggests that it is in fact working for Trump, the economy may well be the most important issue in the key states, the swing states of the Midwest and and a few others like Arizona, and that's going to help Trump tremendously," Sabato said.

The articles of impeachment will head to the Senate for trial.

The timing remains unclear after House Speaker Nancy Pelosi suggested she would not commit to sending the articles to the Senate until she received assurances that Republicans would conduct the trial fairly.

Trump is expected to be acquitted by the Republican-led chamber.

A vote of two-thirds is necessary for conviction, and few Republicans, if any, are expected to stray from plans to acquit.