And rookie Tony Pollard is the fulcrum.

As always, I implore you, Cowboys Nation, to ignore the minute-by-minute thermometer that some in the media pretend to be able to offer as Dallas' negotiations with their holdout superstar plod on. It was 12 days ago when ESPN reported "another positive update'' about negotiations "continuing on the same track'' with the only cautionary note being, "Obviously, though, nothing is done until signed.''

A handful of other media railbirds mimicked the Bristol report, pretending to somehow miraculously have the exact same insight about "progress'' and about Zeke's "imminent'' arrival in Oxnard.

Problem? Those reports, filed on July 29-30, failed to acknowledge a fact: Dallas' contract extension proposal to Zeke at that time ("top-five running back money,'' likely a contract more like La'Veon Bell's $13 mil per year than Todd Gurley's $14 mil per year) had been on the table for days, with no meaningful response from agent Rocky Arceneaux.

And that offer -- a "generous'' one in the eyes of the man who issued it, Cowboys COO Stephen Jones -- still sits on that table ... with no meaningful response from Arceneaux.

Where is all of this "positive'' movement? The predictions didn't come true because the "facts'' weren't true. The positivity came, and comes, from Jerry Jones, not from any movement in numbers or mood. 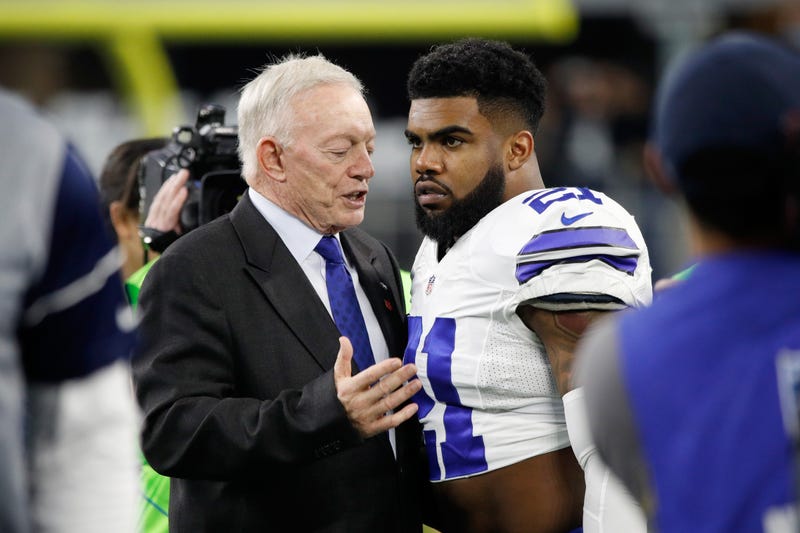 Jerry Jones (left) hopes to work out a contract dispute with Ezekiel Elliott (right) before the start of the 2019 season. Photo credit (Joe Robbins/Getty Images)

Want "positive movement'' at running back? You get that only in Oxnard, on the training camp practice field, where fourth-round rookie Pollard is being touted in a way that almost seems designed as a leverage ploy. Everyone from the owner to the head coach loves talking about Pollard's "juice,'' and while he isn't listed as the No. 1 back on this week's depth chart (the slightly more veteran Darius Jackson has that honor), he's definitely the not-Zeke No. 1 in the Cowboys' hearts.

Pollard, says QB Dak Prescott, one of Elliott's closest pals who texts with him daily, "is one of the most exciting players to me of this training camp.''

Now, that's not a "plant.'' That's real. The organization didn't command Dak to issue a statement intended to put pressure on Elliott.

But could a preseason game against the Niners on Saturday create that pressure, one way or the other? What if Pollard looks like Alvin Kamara this month? (Or, as Hall of Fame scouting guru Gil Brandt suggests, what if Pollard is "great insurance'' against a Zeke holdout because he reminds him of the legendary Lenny Moore?)

On the flip side, what if Pollard demonstrates that he's got a lot to learn, that he's best-suited right now as a complimentary player, and that Zeke is truly still (Stephen's words) "the straw that stirs the drink''?

"Not close'' can morph into "done deal'' in a matter of hours, and it can (and likely will) do so in such a way that the "frauds and posers'' media thermometer cannot keep pace with. But for now?

Two-time NFL rushing champ Elliott is in Cabo, poised to watch this exhibition game and maybe more of them, surely hoping the results provide him leverage. Unproven rookie Pollard is here in San Jose, just trying to win playing time, but likely aware that the Joneses surely hopes he provides them leverage.

And heck, here you and I thought this was going to be a meaningless preseason game.