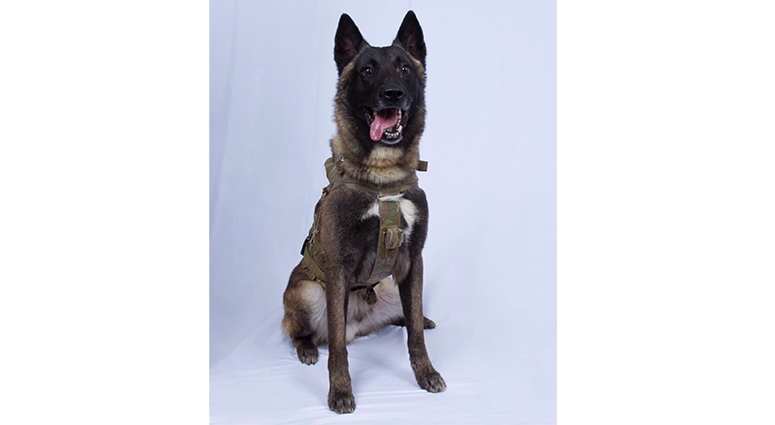 (Connecting Vets) President Trump released a photograph of the military working dog who hunted ISIS leader Abū Bakr al-Baghdadi through a dark and dangerous tunnel in Idlib, Syria during a Delta Force raid over the weekend.

Most military working dogs are German or Dutch Shepards, while others are Belgian Malinois known for their exceptional intelligence and athletic abilities. These dogs are then highly trained and selected, just like their human counterparts in Special Operations Forces.

According to President Trump, al-Baghdadi opted to attempt to flee when members of 1st Special Forces Operational Detachment-Delta, commonly known as Delta Force, landed outside his compound in North West Syria on October 26th. Also, present on the mission were members of the 75th Ranger Regiment. The Delta operators were drawn from A-Squadron. Enablers were also present including Conan and her handler. President Trump stated that Baghdadi grabbed three children and ran down a tunnel that was actually a dead end. Conan's handler cut her loose to subdue the notorious terrorist leader, and as she rushed down the tunnel, Baghdadi detonated a suicide vest he had been wearing, killing himself and his three hostages. The tunnel partially collapsed and Conan was mildly injured but is already back on the job according to Chairman of the Joint Chiefs of Staff General Mark A. Milley and Secretary of Defense Mark Esper.

A source speaking to Connecting Vets on the condition of anonymity stated that the White House demanded a photograph of Conan from JSOC and would not take no for an answer. Delta Force was uncomfortable with the disclosure as the dogs are socialized with their handlers and it becomes another bit of information that could be exploited by the enemy. Furthermore, Delta operators consider themselves quiet professionals and prefer to keep themselves, their operations, and the details of their work out of the limelight.