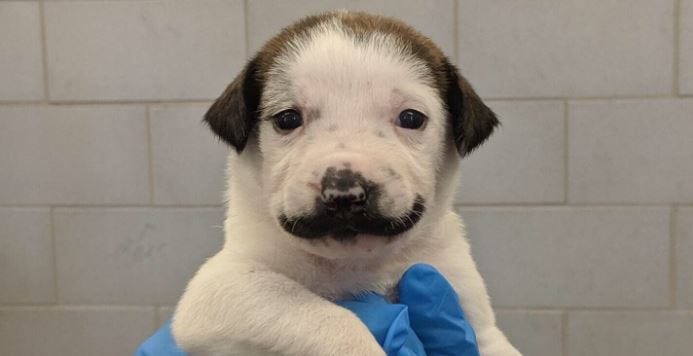 (KRLD) - The calls have been coming in from all over the world. It seems everybody wants to know more about the little dog known as "Salvador Dolly."

The five-week-old shepherd mix puppy, her ten siblings, and their mom were taken in by Dallas-based Hearts and Bones Rescue (HBR), an organization that finds forever homes for shelter animals.

It just so happened that "Salvador Dolly" stood out over her remarkable resemblance to the late Spanish painter, Salvador Dali. The pup's markings below her nose make it look like she has a handlebar mustache, just like Dali.

HBR's Whitney Fang said "Salvador Dolly" was part of a litter rescued from a shelter in July.  Earlier this week, they shared a few photos of the mustached puppy.  "Little did we know that 24-48 hours later, we would be getting so many press inquiries for her picture," Fang said.

Not only has HBR heard from media organizations across the U.S., they've even had calls from throughout Europe.

Fang said "Salvador Dolly" will be staying with them a while longer. "She's not yet available for adoption, given the fact that she's still nursing and still too young. But we've gotten adoption inquiries from all over the U.S. We had a couple even from as far as Rome, so that's new to us," Fang said.

HBR is based in both North Texas and in New York, where there is often a waiting list for animal adoptions.  "Salvador Dolly" and her family likely will go to New York City to find their forever homes later this month or in early September.

Fang said the now-celebrity pup has been a wonderful ambassador for their organization. She hopes the story will inspire more people to give a shelter dog a forever home, adding, "Even if you can't do that, there's other opportunities.