Carmelo Anthony has been out of the NBA for nearly a year, but the 35-year-old star could soon find himself back playing professional basketball in New York once again.

Anthony is set to work out with some Knicks players Thursday, but it’s the Nets who hold interest in signing Melo, according to a report from The Athletic’s Frank Isola.

The report claims that Kyrie Irving and Kevin Durant, Brooklyn’s newly acquired stars, are “pushing” the organization to add Anthony to the team. Both players are close friends with Anthony and likely want to see him get one last season to say goodbye to the NBA.

Isola points out that general manager Sean Marks has the final say, and that he isn’t totally sold on the prospect of bringing in Carmelo.

Signing with the Nets would be a homecoming of sorts for Anthony. Yes, he played for the Knicks and for Syracuse in college, but he was born in Brooklyn. Not that Anthony can claim to be a childhood Nets fan or anything -- the Nets still played in New Jersey when he was a kid in the borough, and his family moved to Baltimore when he was 8. 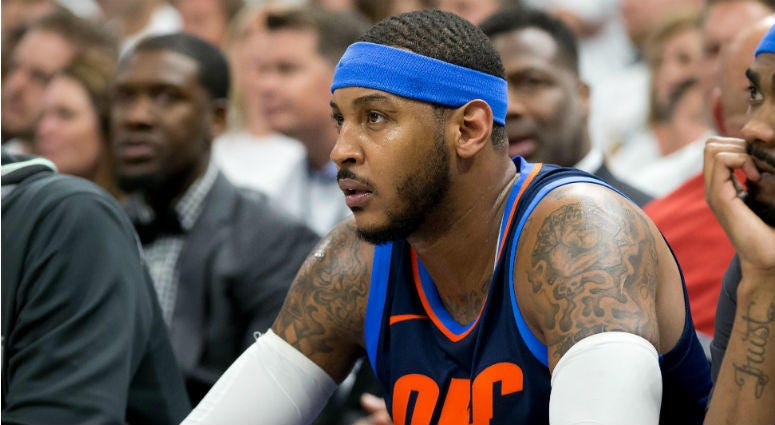 Links back to Madison Square Garden will always draw some attention, but, at the moment, it doesn’t seem like Anthony working out with those Knicks players means the team holds any interest in his services. Carmelo spent six-and-a-half years with the Knicks after they acquired him from the Nuggets in February 2011.

Anthony hasn’t played in an NBA game since Nov. 11 of last year. After that, he was told by the Rockets that he was no longer needed. Houston ultimately traded his rights to the Bulls, who then waived him.

The former Knick was at Barclays Center last season to watch Dwyane Wade’s last game in Brooklyn. He was sitting courtside with Chris Paul when he pretended to be about to run onto the court to shoot a jump shot, which drew laughs from players and fans alike.