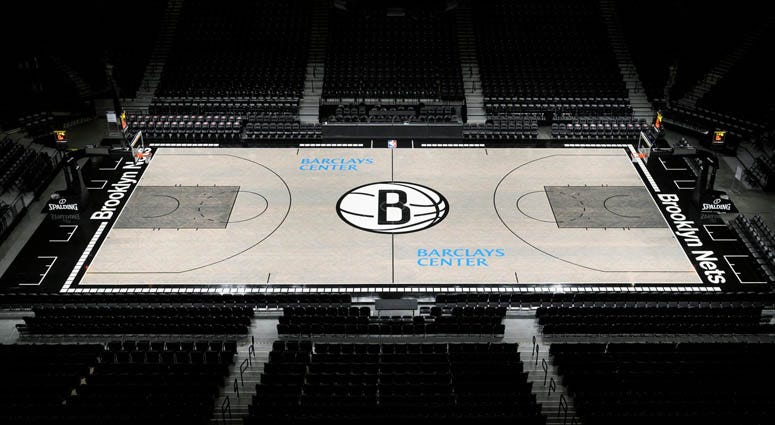 (WFAN) -- The Brooklyn Nets have a new look on the court, and not just in terms of players.

Not only have the Nets signed some new players like Kyrie Irving and Kevin Durant, but they’ve also signed a new court.

On Monday, the Nets unveiled a new look for the court at the Barclays Center ahead of the 2019/20 season. Brooklyn’s new hardwood will be the first gray court in the NBA.

The colors of our new floor, weathered wood and concrete gray, represent playground courts throughout the borough; the brownstone-lined streets and Brooklyn’s industrial foundation. The palette engrains the grit and determination of Brooklyn into our playing surface. pic.twitter.com/S5tRw5TOzP

The redesigned court is apparently supposed to better evoke themes like “grit” and “determination” that the franchise says are representative of the borough itself.

The baselines proudly display “Brooklyn Nets” in typeface inspired by subway signage, with a subway tile pattern running across the apron perimeter. pic.twitter.com/4OnFm1IbwP

The Nets have taken pride in their unique court ever since the franchise relocated from New Jersey. Last year’s hardwood utilized the subway-like mosaic style before it was redone before the season to simply say “Brooklyn” under each basket.

Vice president Jeff Gamble spoke to ESPN about the inspiration and reasoning behind the changes to the flooring at the Barclays Center.

“There was some impetus to refresh things but also some hesitation," Gamble said. "We were nervous about messing it up. We have seen court designs that have fallen on their face.”

The Nets didn’t want to get things wrong, but they were also up against a deadline. The NBA season starts for the team on October 23 against Minnesota, but first there is a home preseason game against Toronto on October 18. After the first stain wasn't dark enough, they had to get a second one done, and apparently had a backup plan ready if the gray still didn't translate well to a broadcast.