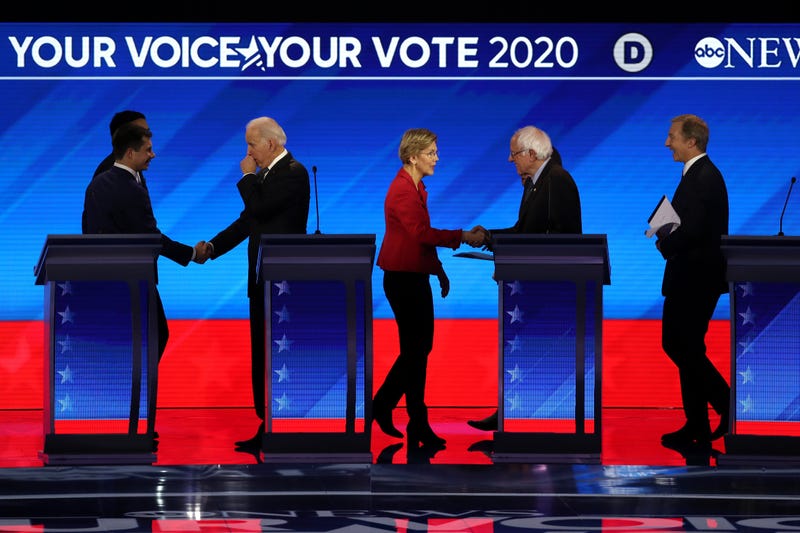 Viewers can expect to see plenty of drama when six Democratic candidates meet for the ninth presidential debate Wednesday night at the Paris Theater in Las Vegas.

The debate, which is being held after the first two voting contests in Iowa and New Hampshire and just days before the Nevada caucuses, will air at 9 p.m. ET on NBC and MSNBC.

Joe Biden, Pete Buttigieg, Amy Klobuchar, Bernie Sanders and Elizabeth Warren will appear on stage, along with Mike Bloomberg who is making his debate debut after rising in the polls. Two candidates remaining in the race didn't make the cut: California billionaire Tom Steyer and Hawaii Rep. Tulsi Gabbard.

A new Washington Post/ABC News Poll out ahead of the debate shows Sanders leading Democrats with 32 percent, followed by Biden with 16 percent and Bloomberg with 14 percent.

Here's what to expect from the debate:

While his rivals are debate veterans at this point, Mike Bloomberg will take the debate stage for the first time and all many are wondering how he'll perform.

"Michael Bloomberg in the last week and a half has sort of gone from abstraction to threat," Garrett said. "Two weeks ago, Democrats sort of had Michael Bloomberg at the corner of their consciousness politically, now he's at the dead center. Why? Because he's rising in the polls, he is becoming better organized in the Super Tuesday states and he has proven he has a bottomless reservoir of money to spend on campaign and digital ads."

The billionaire, who hasn’t been on a debate stage since 2009 when he ran a third term at New York City's mayor, has spent more than $400 million on television, radio and online ads and Bloomberg recently said he's willing to shell out as much as $1 billion to defeat Trump.

Bloomberg has been accused of buying himself a place in this race and will likely face attacks from his rivals on his controversial comments on race and gender.

Bloomberg, who isn't on the ballot in Nevada, has skipped the early voting states to focus on the delegate-rich Super Tuesday contests.

EYE ON THE PRIZE

Sanders has emerged as an early frontrunner in the race, coming off a primary win in New Hampshire and surging in national polls.

Buttigieg, who essentially tied Sanders in Iowa, but came away with one extra delegate and came in a close second in New Hampshire, will have to slow down Bloomberg's momentum and try to paint himself as the candidate to defeat Trump despite his limited experience.

Meanwhile, Klobuchar, who has a significantly smaller national brand, is hoping for another strong performance at the debate after the last one helped her rise to third place in the New Hampshire primary. The Associated Press reports she faces lingering questions about the strength of her organization and appeal among minority voters.

Following disappointing results in the early contests, the Associated Press reports Biden is hoping for a comeback fueled by minority support in the next races in Nevada and South Carolina. A strong performance at the debate, where he's expected to take aim at Sanders and Bloomberg, could help boost his chances.

Another candidate who's got some work to do is Warren, who remains popular with the far-left wing but has yet to win a primary contest and finished fourth in New Hampshire last week.