"For 16 seasons, Eli Manning defined what it is to be a New York Giant both on and off the field," Giants' president and chief executive officer John Mara said in a press release. "Eli is our only two-time Super Bowl MVP and one of the very best players in our franchise's history. He represented our franchise as a consummate professional with dignity and accountability. It meant something to Eli to be the Giants quarterback, and it meant even more to us. We are beyond grateful for his contributions to our organization and look forward to celebrating his induction into the Giants Ring of Honor in the near future."

"We are proud to have called Eli Manning our quarterback for so many years," Steve Tisch, Giants chairman and executive vice president added. "Eli was driven to always do what was best for the team. Eli leaves a timeless legacy with two Super Bowl titles on the field and his philanthropic work off the field, which has inspired and impacted so many people. We are sincerely thankful for everything Eli has given our team and community. He will always be a Giant among Giants."

Manning’s tenure with the Giants appeared to end two weeks into the 2019 season when he was benched in favor of Daniel Jones, but he returned to the field in December after Big Blue’s rookie quarterback suffered an ankle injury.

Sunday Dec. 15, Manning led the Giants to a victory over the Miami Dolphins and walked off the field at MetLife Stadium to a standing ovation. It seemed like a fitting ending for Manning, but at the time, he wasn’t ready to declare his NFL career over.

Now it appears that will be the final memory Giants’ fans have of Eli Manning as their quarterback, following a career in which he was the architect of many great moments, highlighted by two Super Bowl victories over the New England Patriots. 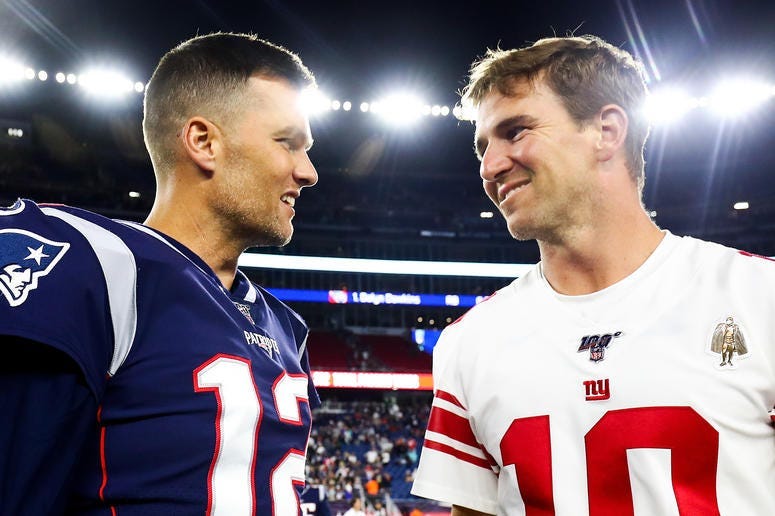 Prior to the end of the 2019 regular season, Manning stated he didn’t want to serve as a backup again next season, making it clear his tenure with the Giants was coming to a close. At 39-years old it was unlikely Manning would receive an offer from a team to be their starting quarterback next season. Rather than test the free-agent market, Manning will instead retire from the NFL having played his entire career for the Giants.

Manning retires having played 16 seasons in the NFL, starting 210 consecutive games. After sitting out one game, Manning continued to start 22 more, having never missed time due to injury. Finishing his career with a 117-117 record and a quarterback rating of 84.1 appears pedestrian at first glance. But two historical playoff runs alongside head coach Tom Coughlin enshrines Manning as an all-time great for the Giants.

"It was an honor and privilege to coach Eli, and to go through the wonderful and magnificent moments that he and his teammates provided for all of us in the world championship '07-'08 and '11-'12 seasons," Coughlin said in the team’s press release. "The New York Giants, flagship franchise of the National Football League, have four world championships You have four trophies sitting there. You have (Phil) Simms, you have (Jeff) Hostetler, and you have Eli for two. Eli Manning not only is the quarterback on those great teams, but he is the MVP of the Super Bowls. He's an incredible big- game performer. You talk about a guy that's great to coach, focused every day, took tremendous pride in preparing, practice, had a great sense of humor, was a cynic in the locker room. But the guys loved him and they loved him for it, and they played for him. The guys that had the opportunity to play with him know what it's like to be with a guy with as much talent, as much grit, as much determination.

"Here goes the retirement of a great, great football Giant. I and my coaching staff and our teams from 2004 right through 2015, for me at least, my part, hold Eli in the highest respect and congratulate him and his family, and his mom and dad, for all of the wonderful, wonderful experiences he's had, and the happiness and pride that he has brought to the entire Giants family, the fanfare, the fans, the family and everyone that's taken so much pride from his performances and for what he's meant. He's always been there to make the call, to stand up and represent the Giants in the best possible way."