(WFAN) -- Odell Beckham Jr. says he believes the Giants were trying to sabotage his career by trading him to the Cleveland Browns in March.

The former Giant makes the accusation in a new Sports Illustrated article. In it, the three-time Pro Bowl wide receiver says of the trade: "This wasn't no business move. This was personal. They thought they'd send me here to die."

Beckham also told SI that star players being shopped around are generally given the opportunity to discuss their preferred trade destinations and that he knows the Giants received better offers than what Cleveland gave up.

The Giants dealt Beckham to the Browns in exchange for a 2019 first-round draft pick (17th overall), a 2019 third-round selection (95th overall) and safety Jabrill Peppers, who was a first-round pick in 2017. 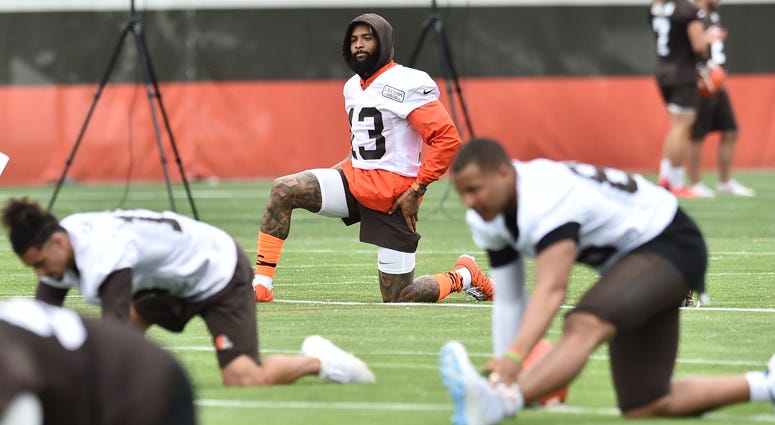 Instead of being consulted, Beckham received a phone call that lasted just seconds from general manager Dave Gettleman informing him of the trade, he said.

Beckham said he had long believed the Giants would trade him, which was a reason he never bought a home in the area even despite signing a five-year contract worth $90 million plus incentives last August. After he was fined for questioning the team's heart and offensive playcalling in an ESPN interview, Beckham said he got the sense his days with Big Blue were numbered.

In New York, Beckham was often criticized for creating distractions, and the ESPN interview was just one example. He also sparred with then-Panther Josh Norman, pretended to be a urinating dog during a touchdown celebration, punched and later proposed marriage to a kicking net on the sideline, and also had starring roles in a controversial boat trip days before a playoff game and in a viral video with a woman and lines of a white powder.

While the star wideout admits he made some mistakes, he said he believes the media was more focused on those than on his performance on the field.

"I was talked about as if I was a celebrity who had the luxury of playing football,” he said. “It got to the point where it wasn’t really about football anymore. It was politics.”

Beckham wasn't the only Cleveland Brown lobbing attacks at the Giants on Tuesday. In a GQ article published online Tuesday, quarterback Baker Mayfield said: "I cannot believe the Giants took Daniel Jones (in the draft). Blows my mind."

Asked about Beckham's and Mayfield's comments Tuesday at training camp, Giants coach Pat Shurmur responded: "Quite frankly on our list of issues of the day, it doesn't matter what Odell or Baker say."