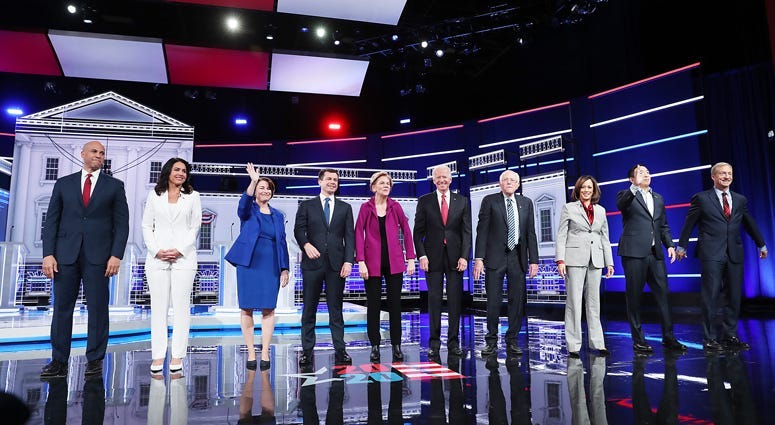 (WCBS 880) — Ten candidates took the stage for the fifth Democratic presidential debate in Atlanta on Wednesday night to tackle several issues including health care, foreign policy and the impeachment hearings.

South Bend Mayor Pete Buttigieg played a key role in the debate that aired on MSNBC now that he has risen to the top of the polls in Iowa.

Without spelling it out, he argued that some of his party's more progressive candidates run the risk of alienating voters, rather than building a coalition that can win next November.

"Even on issues where Democrats have been on defense like immigration and guns we have a majority to do the right thing if we can galvanize, not pulverize that majority," he said.

Sen. Harris on the relationship between the Democratic party and African Americans voters: "The question has to be, 'where you been and what are you going to do?'" #DemDebate pic.twitter.com/bGHKZBKtz2

Electability with African-American voters was a hot topic at the debate.

"We've gotta recreate the Obama coalition to win and that means about women, that's people of color, that's our LGBTQ community, that's working people, that's labor unions, but that is how we are going to win this election and I am in it to win," Sen. Kamala Harris said.

Buttigieg agreed, adding, "I welcome the challenge of connecting with black voters in America who don't yet know me."

Former Vice President Joe Biden explained what it will take to win and govern, and why he is the best qualified candidate.

"The next president of the united states is going to have to do two things: defeat Donald Trump, that's number one, and number two gonna have to be able to go into states like Georgia and North Carolina and other places and get a senate majority and that's what I'll do," Biden said.

Meanwhile, his comments about his support with black voters led to an exchange with Harris.

"I come out of the black community in terms of my support, if you notice, I have more people supporting me in the black community that have announced for me, because they know me. They know who I am, three former chairs of the black caucus. The only African-American woman that had ever been elected to the United States Senate... the whole range of people. My point is..."

All eyes then turned to Harris, who said, "That's not true, the other one is here," to which Biden responded, "I said the first African-American woman."

"Black voters are pissed off and they're worried, they're pissed off because the only time our issues seem to be really paid attention to by politicians is when people are looking for their vote and they're worried because the Democratic party we don't want to see people miss this opportunity and lose because we are nominating someone that isn't trusted, doesn't have an authentic connection."

Sen. Booker on fmr. VP Biden's recent comments on the legalization of marijuana: "I thought you might have been high when you said it" #DemDebate pic.twitter.com/dQf55njB66

Booker took aim at Biden's recent comment voicing resistance to legal marijuana, telling the former vice president that, "I thought you might have been high when you said it."

"Marijuana in our country is already legal for privileged people and the war on drugs has been a war on black and brown people," Booker said.

Biden also used some unfortunate language at the debate to talk about addressing domestic violence.

As the New York Post put it, "Biden puts fist in mouth."

Buttigieg's recent rise in the polls in Iowa turned him into a target, with Sen. Amy Klobuchar questioning the 37-year-old's experience.

"Just like I have won statewide — and mayor — I have all appreciation for your good work as a local official — and you did not when you tried. I also have actually done this work. I think experience should matter," she said.

Buttigieg dismissed the value of experience in Washington and cited his service in the military.

"I know that it's par for the course in Washington to take remarks out of context but that is outlandish even by the standards of today's politics," Buttigieg said.

"Are you saying that you didn't say that," Gabbard asked.

"I was talking about U.S.-Mexico cooperation. We've been doing security cooperation with Mexico for years with law enforcement cooperation and a military relationship," he said.

Buttigieg says he supports a "security partnership'' with Mexico but that he "would only order American troops into conflict if there were no other choice.''

"Do you seriously think anybody on this stage is proposing invading Mexico? ... “I’m talking about building up alliances. And if your question is about experience, let’s also talk about judgment. One of the foreign leaders you mentioned meeting was Bashar al Assad. I have in my experience, such as it is — whether you think it counts or not since it wasn’t accumulated in Washington — enough judgment that I would not have sat down with a murderous dictator like that,” he said.

The impeachment hearings were also a main topic on the debate stage.

Harris, who after watching the hearings, said "We have a criminal living in the White House."

Sen. Harris: We have a criminal living in the White House. https://t.co/TzxWh8ma5a

"And what we saw today is Ambassador Sondland, by his own words, told us that everyone was in the loop. That means it is a criminal enterprise engaged in by the president, from what we heard today, the vice president, the secretary of state and the chief of staff," Harris said.

Foreign policy was also one of the top topics.

"With all due deference to the fact this is a presidential debate, Donald Trump got punked. He has conducted foreign policy since day One born out of a very fragile ego. That fails to understand that one of the most important responsibilities of the commander in chief is to concern herself with the security of our nation and homeland," Harris said.

Sen. Klobuchar took the president to task for his response to Saudi Arabia's role in the killing of Washington Post reporter Jamal Kashoggi.

“When the president did not stand up the way he should have to that killing and dismemberment of a journalist with an American newspaper, that sent a signal to all dictators across the world that that was OK," she said.

Bernie Sanders looked to differentiate himself from Biden by highlighting that he helped lead the opposition against the war in Iraq, while Biden supported it.

The candidates who had the most air time included Elizabeth Warren, Biden and Buttigieg.

Andrew Yang spoke the least, but he did say he would consider pardoning President Trump if he were brought up on criminal charges.

As Yang put it, "We do not want to be a country that gets in the pattern of jailing past leaders," adding "There's a reason why Ford pardoned Nixon."

He also made the audience laugh when he spoke up in support of fellow candidate Tom Steyer, while answering an unrelated question.

"First I just want to stick up for tom, we have a broken campaign finance system, but tom has been spending his own money fighting climate change. You can't knock someone for having money and spending it in the right way in my opinion," yang said.

Steyer discussed how he has used his money to support his political ideals, saying that in his view, donations were used to "push power down to the American people" and to "take power away from the corporations who bought our government."