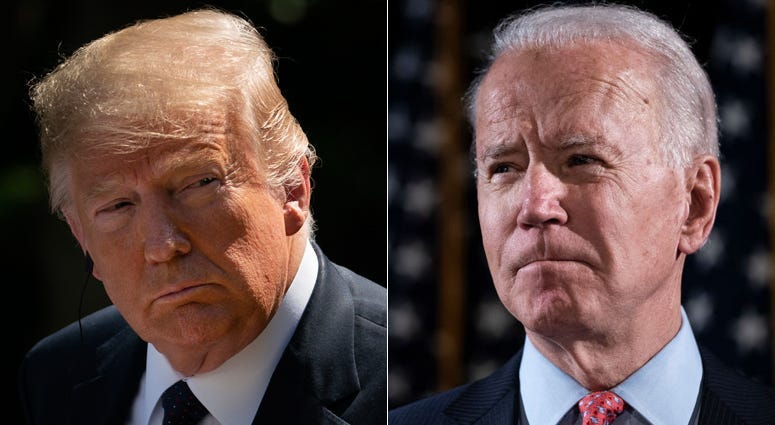 The survey from the New York Times and the Siena College Research Institute shows Biden ahead 50 to 36 percent, and finds him leading among women and non-white voters.

The president is still ahead among white voters without college degress, but 58 percent disapprove of his handling of the coronavirus pandemic, including majorities of white voters and men.

Poll director, Dr. Donald Levy, told WCBS 880's Kevin Rincon that at this point, the election appears to be a referendum on the president.

"Many voters who are typically in the president’s camp, white voters with a college education, to some degree even white voters without a college education, are drifting away from the president. The president still is seen as being better on the economy, but that’s the only major issue. The president’s handling on the coronavirus, the manner in which he addressed the protests, his view on race relations; in those areas, voters vastly preferred Joe Biden to President Trump," Levy said, adding "voters seem to be moving away from the president because of those issues."

The latest poll shows the president not only trailing nationally, but also in several key states.

"We took a look at the six battleground states, each of which were won by President Trump in 2016, and Joe Biden has opened up significantly in some, commanding leads in others. He’s up by 6 points in Florida, 7 in Arizona, 9 in North Carolina, 10 in Pennsylvania, and 11 points in both Michigan and Wisconsin. Those are significant leads at this point in the campaign," Levy said.

These six key states, Levy says, may decide the election in November.

"If you add up the votes in the Electoral College, if Joe Biden were to win 3 of the 6 battleground states and hold the states that Hillary Clinton won in 2016, he’d be the next President of the United States," Levy said. "This is where the battle of the presidency will be fought. Even if you compare to when we pulled these same states last October, Biden has opened up leads where there were not leads before. Overall, he was up about 2 points in October, now across these 6 states, he’s up by 9 points. The president needs to rally in these 6 states if indeed he’s going to compete to be reelected in the fall."