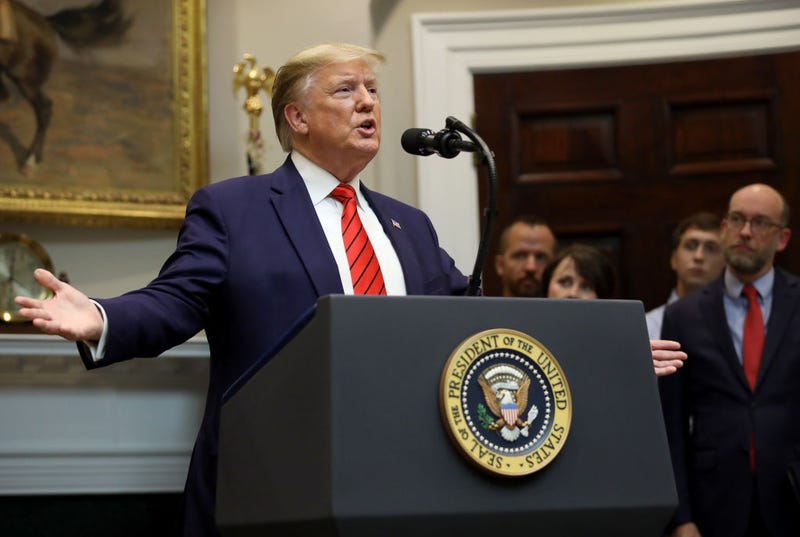 Wednesday marks the the fourth day of public testimony in the impeachment inquiry of  President Donald Trump.

The three witnesses scheduled to field questions from the House Intelligence Committee are Gordon Sondland, the United States Ambassador to the European Union, Laura Cooper, the deputy assistant secretary of defense for Russian and David Hale, the undersecretary of state for political affairs.

Check back to this article for commentary and updates about the hearing from journalists in KCBS Radio's newsroom.

*All LIVE updates are in Eastern Time*

After the end of today’s #ImpeachmentHearings, @RepAdamSchiff took up a GOP motion to subpoena Hunter Biden & Ukrainian-American Alexandra Chalupa. @RepSwalwell moved to table the motion (which effectively kills it), and that passed, over Republican objections.

END OF THE HEARING

Testimony is complete for the day, after an 11-hour day. Now @DevinNunes is delivering one of his patented attacks on the process. He ends by saying "It's time to put the kids to bed. I now yield to Mr. Schiff and Story Time Hour." @RepAdamSchiff thanks him (much laughter).

Rep. @Jim_Jordan: "You don't know who was in the meeting?"

Sondland: "Which meeting are you referring to?"

Jordan: "The meeting that never happened. Who was in it?"#SondlandTestimony pic.twitter.com/PdZvS28bU8

If this were a prizefight, they’d stop it!

Big takeaway from this afternoon's testimony here: #Ukraine did know the US aid was being withheld #ImpeachmentHearings https://t.co/xDOG4x4wiD 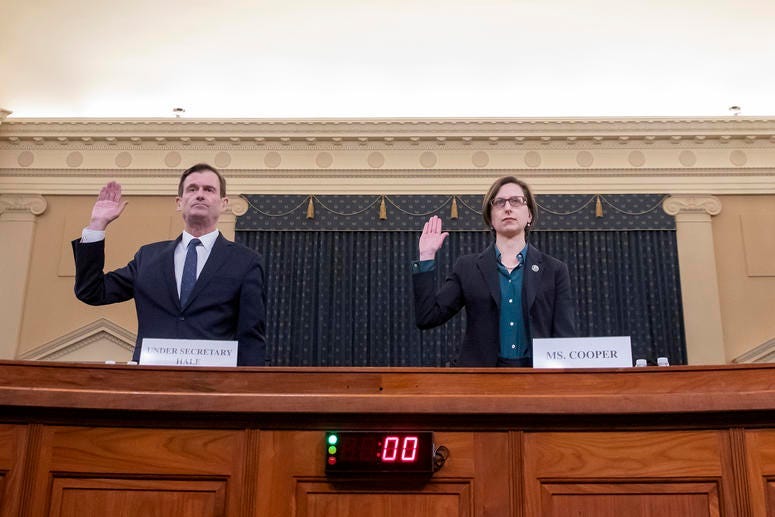 The House Intelligence Committee is hearing from Under Secretary of State David Hale and Deputy Assistant Secretary of Defense Laura Cooper this afternoon.

This is how the Associated Press described their roles in the Trump administration's dealings with Ukraine:

"In earlier closed-door testimony, Cooper said she advised other administration officials that Trump held up the aid through instructions to the White House Budget office and said she raised concerns to other government officials about the legality of holding up the aid to Ukraine," the AP wrote.

"Hale promises to provide details about the ouster of Yovanovitch, who was ousted after a smear campaign by Rudy Guiliani, Trump’s personal lawyer," the AP also said.

Thankfully, @RepAdamSchiff is shortening this session of the #ImpeachmentHearings. Going straight to the committee members, with 5 minutes each, and skipping the 90 minutes he and @DevinNunes usually take first.

A better shot of Trump’s notes (from Mark Wilson of @GettyImagesNews) reveals he doesn’t know how to spell the name of #Ukraine president Zelenskyy (can also be spelled with just one y, but it is most definitely not “Zellinsky”) pic.twitter.com/vMgEHCMgSH

After hours of Twitter silence during Ambassador Gordon Sondland's testimony, President Trump addressed reporters on the White Hiouse driveway before departing for Austin, Texas to tour an Apple facility with CEO Tim Cook. Mr. Trump said repeatedly, "I want nothing, I want nothing, I want no quid pro quo," words that could be seen written on a notepad he held in his hand.

THE INTERNET IS BUSY

It's the Republicans' turn as the hearing resumes.

Chairman Adam Schiff calls a "five or ten minute" break. When the hearing resumes, Ranking Member Devin Nunes (R-CA) will have the baton.

YEP, HE SAID IT

Asked if he really told @realDonaldTrump on the overheard phone call that Zelensky "loves your ass," #GordonSondland answers: "Sounds like something I would say! That's how President Trump and I communicate, a lot of 4-letter words. In this case, 3 letters." #Pizzazz

SEARCHING FOR A METAPHOR

He also refutes anticipated GOP rebuttal that he was running a "rogue operation" and makes clear "scheme" was orchestrated by Trump.

NO SUGARCOATING FROM SONDLAND

#ImpeachmentHearings
You will hear or see the #QuidProQuo soundbites of #GordonSondland many, many, many times today, and probably for a long time to come. https://t.co/RGpi6FXEvy

#GordonSondland discussed the delay in releasing aid to #Ukraine with VP Pence and expressed his concerns that it was tied to the #QuidProQuo. Pence then discussed it with Zelensky & promised to discuss it with @realDonaldTrump #ImpeachmentHearings

#GordonSondland discussed the delay in releasing aid to #Ukraine with VP Pence and expressed his concerns that it was tied to the #QuidProQuo. Pence then discussed it with Zelensky & promised to discuss it with @realDonaldTrump #ImpeachmentHearings

"Was there a #QuidProQuo? The answer is yes," #GordonSondland will say in his opening statement. #ImpeachmentHearings just underway.

Think how many times @realDonaldTrump and his allies have denied there was a quid pro quo.

From The Associated Press, reporting on Sondland's prepared remarks: "Ambassador Gordon Sondland says he kept top members of the Trump administration, including Secretary of State Mike Pompeo, in the loop about President Donald Trump's pressure on Ukraine for investigations.
In remarks to a House intelligence panel, Sondland tells lawmakers that it was well-established within the Trump administration that there was a quid pro quo involving Ukraine."

FROM BOUTIQUE HOTELS TO THE POLITICAL SPOTLIGHT

Gordon Sondland's hotel empire started with the Roosevelt Hotel in his hometown of Seattle. Over the last 25 years, his Provenance Hotels chain has expanded to more than a dozen boutique properties from coast to coast; many in the Pacific Nothwest. His $1 million donation to the Trump inauguration committee put him in the political spotlight and preceded his nomination to the post of US Ambaddaor to the European Union.