Spring training has barely just begun for the Yankees, and there’s already a health concern for Luis Severino.

Severino missed the vast majority of last season because of a few different shoulder injuries. Those various ailments kept him out until September after they were first noticed in camp not too long before Opening Day.

Now, history might be repeating itself. Aaron Boone announced Thursday that Severino will be shut down for several days as he is dealing with soreness in his right forearm.

The Yankees manager was asked if Severino would be ready for the start of the season, but Boone couldn’t give a decisive answer, simply saying “we’ll see," while adding that the soreness is "concerning." 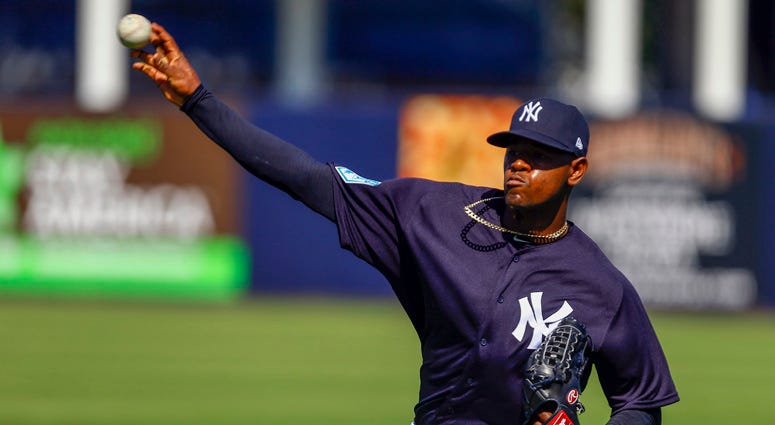 According to Boone, this soreness has been a problem for the righty since he pitched in the ALCS against the Astros back in October. Severino went 4.1 innings when he started Game 3 of that series, and Boone says he would have been cleared to start Game 7 if the Yankees hadn’t lost Game 6.

It’s always concerning when a pitcher has soreness in their throwing arm, so the team’s training staff will be cautious with Severino, especially given what he went through in 2019. Last season’s injury also started off as soreness before it was revealed to be a strain which would require a longer healing period.

General manager Brian Cashman told reporters that Severino has been prescribed anti-inflammatory medication, and that the plan now is for him to rest. Cashman described the situation as an "unknown," and he was unsure whether it would be a short term or a long term problem.

If Severino does miss an extended period of time, the Yankees' pitching depth will be tested. Gerrit Cole was the big addition brought over from the Astros this offseason, but James Paxton is also set to miss time as he recovers from back surgery.