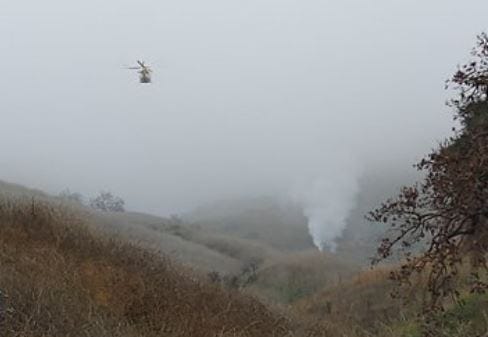 On Monday evening, investigators from the National Transportation Safety Board (NTSB) held a news briefing to discuss the probe into Sunday's helicopter crash that killed Kobe Bryant and eight others. The briefing will be held at the sheriff's department's Malibu/Lost Hills Station.

NTSB member Jennifer Homendy says the agency is asking anyone who has photos depicting the weather conditions in the Calabasas area when Sunday's helicopter crash occurred to share them with investigators emailing them to: witness@ntsb.gov.

Homendy says she's very confident they will uncover the cause of the crash.

An NTSB "Go Team" met with local authorities Monday morning, setting organizational boundaries for the probe, even as work continued to recover the bodies of the nine people who died in the Sunday morning crash near Las Virgenes Road and Willow Glen Street.

Little is likely to be known about what brought down the Sikorsky S-76B helicopter amid dense fog until the agency's investigation is completed. Such probes can often take a year or more to complete.

Although none of the victims of the crash has been formally identified by local authorities, relatives and friends have identified them as:
-- Ara Zobayan, the instrument-rated pilot who was flying the helicopter;
-- John Altobelli, 56, the veteran baseball coach at Orange Coast College in Costa Mesa, along with his wife, Keri and their 13-year-old daughter Alyssa, a teammate of Gianna;
-- Sarah Chester, 45, and her 13-year-old daughter Payton, who also played with Gianna and Alyssa; and
-- Christina Mauser, 38, one of Bryant's assistant coaches on the Mamba Academy team.

Coroner's office officials said recovering the victims' remains from the rugged crash site could take "a few days." The area has been cordoned off by the sheriff's department, accessible only to area residents with identification, and the airspace above it has been declared a no-fly zone.

The helicopter took off from John Wayne Airport in Orange County at 9:06 a.m. Sunday, records show. The crash occurred in foggy conditions, which prompted the Los Angeles Police Department to ground its helicopter fleet, the nation's largest such fleet. Los Angeles County Sheriff Alex Villanueva also said his agency had no helicopters in the air at the time due to the conditions.

Friends noted that Bryant's pilot, Zobayan, was an instrument-rated pilot -- meaning he was qualified to fly in foggy and cloudy conditions -- with more than 1,000 hours piloting the craft.

It appears that recovery crews are removing more bodies from the wreckage of the #helicopter crash in #Calabasas, and putting them on gurneys for the trip down the hillside. #KobeBryant @KNX1070 pic.twitter.com/c8TJr2sqrQ

All victims have been ID-ed and are being recovered from the wreckage of the Calabasas helicopter crash Monday.

Victims include Bryant, 41, his daughter Gianna, 13, Orange Coast College baseball coach John Altobelli, his wife Keri and daughter Alyssa, middle-school player Payton Chester and her mother Sarah Chester along with Christina Mauser, who was a girl's basketball coach at a private school in Corona del Mar. The ninth victim was the chopper's pilot,50-year-old Ara Zobayan, who owned and also flew-for the company "Island Express Helicopters."

People have started leaving flowers near the scene of the #helicopter crash in #Calabasas. #KobeBryant. @KNX1070 pic.twitter.com/twSdsNKqfy

Flags will be lowered to half-staff Monday to honor the victims of the crash, the Mayor of LA tweeted Monday morning.

According to Business Insider, the helicopter that crashed Sunday was built in 1991 and owned by Island Express Holding Corp. and either chartered or leased by Bryant. The S-76 was designed for corporate transportation, especially within the oil industry, where executives were traveling between land and off-shore drilling platforms, and was inspired by the UH-60 Black Hawk military helicopter, according to the publication.

The site says the helicopter's good safety record "has been largely attributed to its twin-turbine design, along with more rigorous training standards than some other civilian models, and the fact that it's frequently flown by two pilots, unlike most light helicopters."