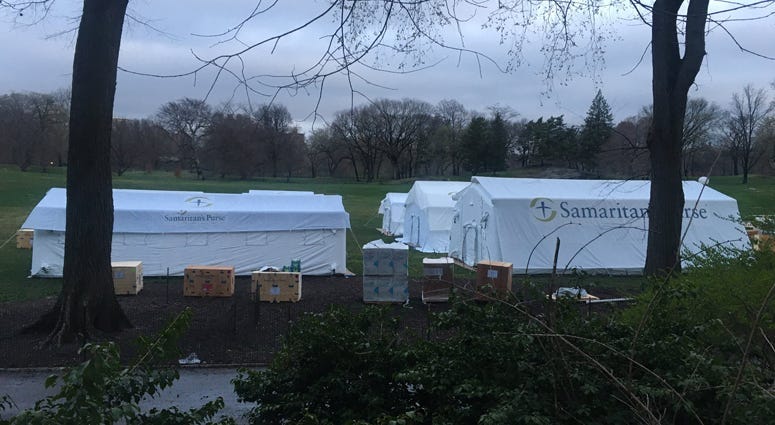 NEW YORK (WCBS 880) -- The number of coronavirus cases in New York City jumped to 33,474 on Sunday as the death toll climbed to 776 and Mayor Bill de Blasio said a field hospital was being built in Central Park.

The breakdown by borough is:

At a news conference Sunday afternoon, Mayor Bill de Blasio said a 68-bed field hospital with ICU capability is being built in Central Park across from Mount Sinai Hospital.

The massive white tents being set up in the park's East Meadow across from Mount Sinai Hospital stand in stark contrast to the green lawn and spring flowers in New York's urban oasis.

"This is the kind of thing you will see now as this crisis develops and deepens," de Blasio said.

On Sunday, Samaritan’s Purse brought four trailers of gear including tents, beds, personal protective equiptment and 10 ventilators for the most seriously ill.

The doctor who will run this field hospital, Elliott Tenpenny, has treated ebola patients in Africa and earthquake survivors in Ecuador. He tells the New York Post he would have never guessed they'd be coming to New York City, but then he says New York City never thought it would be dealing with a pandemic.

setting up tents. my sinai pic.twitter.com/XgTXS8ikMP

The city’s ambulances are responding to about 6,000 calls a day — more than 50% more than average. Fire Commissioner Daniel Nigro said Sunday that the last five days have been the busiest stretch in the history of the city’s EMS operation.

"This is unprecedented," de Blasio said. "We’ve never seen our EMS system get this many calls ever.”

Nigro said the surge is delaying responses to lower-level calls. De Blasio said the city is planning to shift personnel onto EMS crews to help keep up with demand.

De Blasio said he has asked the federal government to deliver 400 more ventilators to city hospitals by Wednesday and warned that without reinforcements the city will run out of masks, gowns and other hospital supplies in a week.

With the expected peak of cases in the city still two to three weeks away, de Blasio said Sunday that he has asked the U.S. military to aid in sending needs new waves of doctors, nurses and other medical personnel to the city.

Cuomo said Sunday that more than 76,000 health professionals, including many who’ve recently retired from the field, have volunteered to help in the coronavirus fight.

The USNS Comfort, a Navy hospital ship with 1,000 beds, 12 operating rooms and a full medical staff, is scheduled to arrive in the city on Monday. It will be used to treat non-coronavirus patients to free up space in city hospitals to deal with the disease.

De Blasio also said 650 inmates have been released from jails since Saturday night and that the jail population is down to 850—something that's also due to lower crime and arrests.

He said traffic on the Staten Island ferry was down 86 percent from the same period last year that it would move to hourly service starting Sunday night.

The mayor also said New Yorkers who refuse to practice social distancing can face up to a $500 fine.

(The Associated Press conributed to this report.)